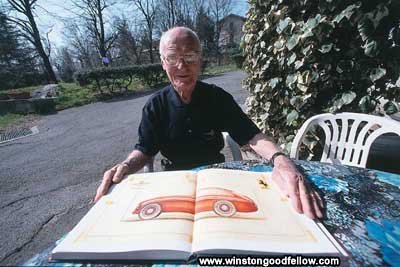 Role in Ferrari History: The designer who gave the Ferrari automobile its first “face”

Affable and widely respected, Carlo Felice Bianchi Anderloni (1916-2003) grew up with automotive design in his blood. The son of Felice Bianchi Anderloni, a principal in and design director of Carrozzeria Touring, young Carlo often accompanied his father to the famed coachbuilding firm during his youth. He also watched his father race successfully, and remembered pouring water on the competition car’s brakes to cool them down when, during road races, Felice would stop at the roadside family picnic!

Carlo Anderloni was blessed with a photographic memory, and as a youngster he observed his father’s creations from a unique perspective. “As I grew older,” he recalled, “my father would come home every day for lunch. From the window of our flat, I would see at least five different cars a week! So early on I became a fan of bodywork.”

Those memories, coupled with his own eye, his good taste, and lessons taught by Felice, all but guaranteed his place in automotive history. He graduated from college with a degree in mechanical and coachbuilding engineering. After service in World War II, he went to work at Touring, learning the business at the side of his father. He was thrown in the hot seat when Felice unexpectedly passed away in 1948.

Carlo’s first car was Ferrari’s seminal 166 Barchetta. “Just imagine if the first Ferrari I did was not a wonderful car,” he remembered years later. “Then all the people would have thought that if the design had turned out bad, Touring had finished with the death of my father.”

The 166 Barchetta influenced automotive design for more than a decade. Carlo penned a number of other Ferraris, and had clients as diverse as Alfa Romeo, Spain’s Pegaso, Britain’s Aston Martin, Lamborghini, and Hudson in America.

He remained Touring’s design director and a principal until it went under in 1966. The spirited, energetic Anderloni then served as a consultant to Alfa Romeo well into his 70s.