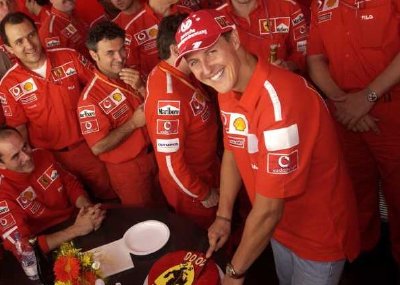 Michael Schumacher signed with Ferrari in 1996.

Michael Schumacher (1969- ) was the face of Formula 1 racing as the sport grew to unprecedented worldwide popularity in the 1990s and early 2000s.

Going into the 2004 season, he had amassed more career victories, 82, and more World Championships, 7, than any driver in F1 history. He was by that season 35 years old, the “old man” of the circuit, but he remained its finest-conditioned athlete.

The most dominating driver in the annals of F1 was born near Cologne, Germany, in January 1969. His father managed a local karting track, and hand-built go-karts for Michael, who began competing at age four. Schumacher obtained his first competition license at age 12. As a teenager, he won numerous European karting championships. He graduated to Formula 3, and won the F3 title at age 21. He was quickly hired by Mercedes-Benz to drive the World Endurance Championship Sauber-Mercedes.

Schumacher’s F1 debut came in 1991, for Jordan; he qualified an impressive seventh for his first race, the Belgium Grand Prix, and finished the season 14th among 24 drivers in overall points. Benetton-Ford signed him for 1992. He had one win that year, but finished third in the driver’s championship. His first World Championship came for Benetton-Ford in 1994; he repeated in ’95. By the end of that season he had been in 31 F1 races, and had finished first 17 times.

Schumacher signed with Ferrari in 1996, finished a close second in driver’s points in ’97 and ’98, and helped bring the constructors title to Maranello in 1999. In 2000, Ferrari and Schumacher began a string of five consecutive constructor and driver’s championships.

Schumacher’s success didn’t come without a controversial “win at all costs” reputation, and he pushed more than one title competitor off the track. Away from F1, Schumacher was intensely private, though the nonracing world took notice in 2004 when he made a $10 million donation to tsunami relief.

After but a single victory in 2005 and another seven in ’06, Schumacher confirmed what many had long suspected and announced his retirement from Formula One. He informed the press after scoring his 90th GP win at Monza in October, less than three months before his 39th birthday. “Judging by the look on his face,” noted Road & Track’s Joe Rusz, “the enormity of his decision had just begun to sink in.”

The racing world certainly needed time to adjust. Schumacher’s departure immediately changed not only Ferrari’s near-term prospects but the complexion of the entire Formula One scene. It could hardly be otherwise, given his long career and sterling accomplishments: 16 seasons, 249 starts, 91 victories, and a record seven world driving championships. Though debate still rages over who might pick up his mantle, most everyone agrees that Schumacher will be missed for years to come. Rusz, for one, posed the inevitable question, “Will there ever be another Schumi,” then supplied this answer from another legendary driver, Mario Andretti: “Yeah, there will be others, but he will remain forever in history and people will look back with nostalgia on the days of Michael Schumacher.”