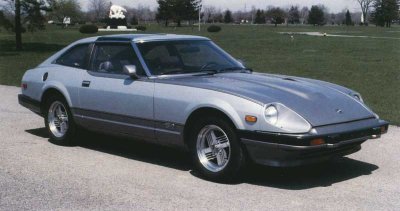 The Datsun 280ZX may have looked like a copy of previous models, but there was plenty more under the hood.

The original Datsun Z-car sold so well that a successor was never in doubt. Christened Datsun 280ZX, it didn’t last as long -- five years instead of seven -- but sold relatively better. In 1979-80, Nissan moved over 140,000 in the U.S. alone. The ZX was also much more popular in Europe than the 260Z it replaced there and in Japan. It only goes to show that the public recognizes an attractive package more than the motoring press, which wasn’t nearly so enthusiastic about the second-generation design.

Because styling continuity was deemed important for sales, the Datsun 280ZX looked much like its predecessor -- so much so that some wondered whether it wasn’t merely the old car with a new skin. It wasn’t. The styling, an in-house job this time, was beefier and busier, while the all-steel unit body/chassis structure was not just completely different but more spacious and practical. In U.S. form, the only carry over components were engine and driveline, but the 2.8-liter powerplant was now extended to all markets. The American version arrived with 135 horsepower (SAE net) compared to 140 bhp for European models; the former was boosted to 145 bhp for 1981.

The Datsun 280ZX marked Nissan’s first use of wind-tunnel testing during design development. It didn’t look any slipperier than previous Zs (quite the contrary to some eyes) but it was. It also weighed about the same despite meeting all the latest U.S. “crash” standards, though it was still a bit overweight, all things considered. Nissan tacitly admitted as much by fitting a larger fuel tank and a secondary fuel gauge that measured just the final fourth of it. Dimensionally, wheelbase lengthened by 0.6-inch on the two-seater and shriveled by 3.4 inches on the 2 + 2. There were similar changes in overall length, while width increased but fractionally.

Production economics dictated more component sharing than on the original Z, so Datsun 280ZX suspension was borrowed from Nissan’s upmarket 810 sedans. MacPherson struts, lower lateral arms, and coil springs returned up front with compliance rather than tension struts. The big change was at the rear, where simpler BMW-style semi-trailing arms substituted for Chapman struts and lower A-arms, and the entire assembly was newly mounted on a separate subframe.

All-round coil springs continued. In response to road-test criticisms, rear brakes were switched from drums to discs, and there were now two types of steering: manual rack-and-pinion or power-assisted recirculating-ball (licensed by ZF). As before, it was generally agreed that the latter should have been standard for proper handling, but U.S. customers got it without paying extra only if they bought a 2 + 2.

Nissan fought hard to maintain Z-car performance in the face of ever-tightening emissions requirements, and mostly succeeded. Road & Track magazine, for example, recorded a top speed of 121 mph for the debut-year two-seater and 9.2 seconds in the 0-60 mph run. Alas, the Datsun 280ZX was definitely softer on the road than even the last of the original Zs, if still sporty enough to win wide favor. Said R&T: “Today’s Z-car is not yesterday’s Z-car, and though purists will mourn the passing of the sports car Z, enthusiasts will rejoice for the GT Z.”

The Datsun 280ZX also became something of a Japanese Corvette. First came a Vette-style T-bar roof option for 1980 two-seaters, extended to the 2 + 2 for 1981. Within a year, it was accounting for some 50 percent of all U.S. ZX sales. Even closer to America’s sports car for performance was the Datsun 280ZX Turbo, introduced in two-seat automatic form at mid-model year ’81 and also offered as a 2 + 2 for 1982-83, along with manual transmission.

But by this time, the enthusiastic press had come around to Consumer Guide®’s point of view. “Fundamentally,” said a 1981 R&T comparison test, “the Datsun has less ’soul if that matters, than the pur sang Alfa [GTV-6] and Porsche and also what felt like about 800 lbs more weight (actually 150)...Meet the world’s best boulevard sports car, one that can just about hold its end up with the real racers.”

Damning with faint praise? Yes, but there was no denying that the Datsun 280ZX was just about unbeatable as a GT. And despite price escalation over the years, it offered the same high value, relatively speaking, as the pioneering 240Z.

In the end, though, the Datsun 280ZX was really too conservative and it aged with disarming speed. By 1984, enthusiasts were hoping not just for another new Z but one with “soul.” What they got was another cautious evolution, the Nissan 300ZX -- so they’re still wishin’ and a-hopin.’

To learn more about Datsun and other sports cars, see: