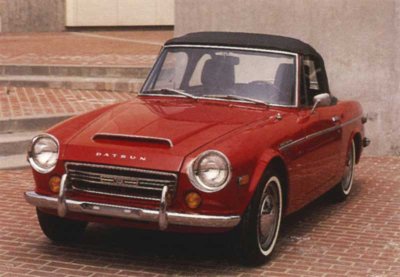 The Datsun 1500 Sports roadster was sometimes described as a copy of the MGB, but it debuted before the MG. See more muscle car pictures.

Remember the cars the Japanese used to build? Even if you do, it’s helpful to recall them now and then, for there’s no better way to appreciate how far the Japanese indu­stry has come -- or how quickly. Nissan’s first sports cars, such as the Datsun 1500 Sports are a case in point.

Nissan Motor Corporation wasn’t officially organized until 1934, though its origins go all the way back to 1911. Its earliest car, the 1914 DAT, eventually led to the Datson and, in 1934, the name Datsun. The firm’s late-Thirties models were mostly scaled-down British and American designs (including a true “joint-venture” car patterned on the American Graham Crusader), while reworked British Austin A40s, built under license, led a halting recovery in the early postwar years. Amazingly, Nissan didn’t get around to a new postwar design of its own until 1958, the Datsun Bluebird sedan.

But bigger and better things weren’t long in coming. The very next year brought a new open two-seater, catering to a traditional Japanese fondness for such cars. Designated S211, it replaced the original Datsun Sports that had been built in small numbers for domestic sale since 1952.

It was also the first Datsun to bear the poetic Fairlady name that’s still in use today, though the car itself was nothing to write sonnets about. Carrying a 60-horsepower 1189-cc four, it was sized like an Austin-Healey Sprite yet wasn’t as peppy or agile. Worse, it tried to look like a big Healey. Somehow, production continued through 1963.

Meantime, the 1961 Tokyo Motor Show brought a surprise: an all-new Datsun roadster, the Fairlady 1500. More grown up and civilized than the S211, it offered better performance and more “international” styling in a conventional but well-equipped package that would remain popular through the end of the Sixties. Today, we recognize this generation as significant in paving the sports-car path that ultimately led Nissan to the history-making 240Z.

Designated SP310, the new Fairlady roadster looked rather like the MGB it predated by a full year, with the same neat, squarish, slab-sided body lines and scooped headlamp nacelles. At first it was a three-seater, with a single sideways-facing rear bucket, though that feature was dropped by 1963.

As was Japanese custom even in those long-ago days, the Fairlady 1500 was fully equipped and priced to sell. Standard amenities like wind-up windows, radio, heater, and snap-on tonneau put it way ahead of most European contemporaries in value for money, and workmanship was at least their equal, if not better. Still, with only 95 mph maximum, the 1500 wasn’t a true performance rival for established British and Italian sports cars.

Nissan wasted little time in making it one. Twin SU carburetors (license-built by Hitachi) arrived in 1963, adding 10 horses. Then in September 1964, the 1500 gave way to an uprated 1600 model (CSP311) with 1595 cc and 96 bhp, plus all-synchro gearbox, a more modern diaphragm-spring clutch, and front disc brakes.

Smoother, quieter, and faster (top speed was a genuine 100 mph), the 1600 sold like hotcakes, especially in the U.S. May 1965 brought a five-main-bearing crankshaft for a refined edition (SP311). Sold in the U.S. as the Datsun 1600, it had the same engine but was an inch shorter, a half-inch narrower and about two inches higher.

By this time, American emissions regulations were in sight, and Nissan’s product line was not only expanding but moving up the size and displacement scale. These factors prompted a final evolution of the British-inspired roadster, the 2000 (SR311). Introduced in 1967, it logically carried a 2.0-liter engine, the new Type U20 overhead-cam four with no less than 135 bhp, mated to a new 5-speed gearbox.

Weighing little more than the 1600, it could reach an easy 110 mph. (There was also a limited-production 145-bhp competition version capable of over 125 mph.) At under $3000, it was a whale of a buy and surprisingly able on the track. Like the 1600s, modified 2000s quickly found their way into SCCA racing, and a young Hannu Mikkola even drove one in the Monte Carlo Rally.

All things considered, these simple sporting Datsuns were a big success, one reason you still see them running around today. Like most Japanese cars of the Sixties, they weren’t original in design, but they were definitely good value, built to last, and just plain fun. Perhaps things haven’t changed so much after all.

To learn more about Datsun and other sports cars, see: