Browse the article How CVTs Work 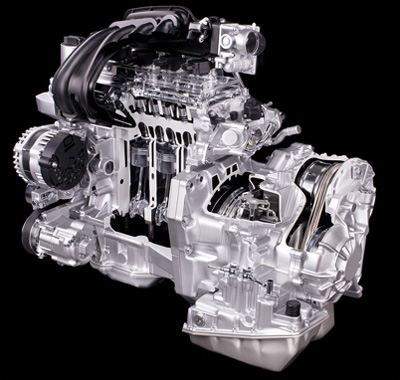 Some say you can't teach an old dog new tricks. But the continuously variable transmission (CVT), which Leonardo da Vinci conceptualized more than 500 years ago and is now replacing planetary automatic transmissions in some automobiles, is one old dog that has definitely learned a few new tricks. Indeed, ever since the first toroidal CVT patent was filed in 1886, the technology has been refined and improved. Today, several car manufacturers, including General Motors, Audi, Honda and Nissan, are designing their drivetrains around CVTs.

In this article, we'll explore how a CVT works in a typical rear-wheel driven car, answering several questions on the way:

First, we'll look at how a CVT compares to a traditional automatic transmission.

­If you've read about the structure and function of automatic transmissions in How Automatic Transmissions Work, then you know that the job of the transmission is to change the speed ratio between the engine and the wheels of an automobile. In other words, without a transmission, cars would only have one gear -- the gear that would allow the car to travel at the desired top speed. Imagine for a moment driving a car that only had first gear or a car that only had third gear. The former car would accelerate well from a complete stop and would be able to climb a steep hill, but its top speed would be limited to just a few miles an hour. The latter car, on the other hand, would fly at 80 mph down the highway, but it would have almost no acceleration when starting out and wouldn't be able to climb hills.

So the transmission uses a range of gears -- from low to high -- to make more effective use of the engine's torque as driving conditions change. The gears can be engaged manually or automatically.


In a traditional automatic transmission, the gears are literally gears -- interlocking, toothed wheels that help transmit and modify rotary motion and torque. A combination of planetary gears creates all of the different gear ratios that the transmission can produce, typically four forward gears and one reverse gear. When this type of transmission cycles through its gears, the driver can feel jolts as each gear is engaged.

CVT Basics
Unlike traditional automatic transmissions, continuously variable transmissions don't have a gearbox with a set number of gears, which means they don't have interlocking toothed wheels. The most common type of CVT operates on an ingenious pulley system that allows an infinite variability between highest and lowest gears with no discrete steps or shifts.


If you're wondering why the word "gear" still appears in the explanation of a CVT, remember that, broadly speaking, a gear refers to a ratio of engine shaft speed to driveshaft speed. Although CVTs change this ratio without using a set of planetary gears, they are still described as having low and high "gears" for the sake of convention.

Next, we'll look at the different types of CVTs: pulley-based, toroidal and hydrostatic.

Peer into a planetary automatic transmission, and you'll see a complex world of gears, brakes, clutches and governing devices. By comparison, a continuously variable transmission is a study in simplicity. Most CVTs only have three basic components: CVTs also have various microprocessors and sensors, but the three components described above are the key elements that enable the technology to work.

The variable-diameter pulleys are the heart of a CVT. Each pulley is made of two 20-degree cones facing each other. A belt rides in the groove between the two cones. V-belts are preferred if the belt is made of rubber. V-belts get their name from the fact that the belts bear a V-shaped cross section, which increases the frictional grip of the belt.

The simplicity and stepless nature of CVTs make them an ideal transmission for a variety of machines and devices, not just cars. CVTs have been used for years in power tools and drill presses. They've also been used in a variety of vehicles, including tractors, snowmobiles and motor scooters. In all of these applications, the transmissions have relied on high-density rubber belts, which can slip and stretch, thereby reducing their efficiency.

The introduction of new materials makes CVTs even more reliable and efficient. One of the most important advances has been the design and development of metal belts to connect the pulleys. These flexible belts are composed of several (typically nine or 12) thin bands of steel that hold together high-strength, bow-tie-shaped pieces of metal.

Another version of the CVT -- the toroidal CVT system -- replaces the belts and pulleys with discs and power rollers.

Although such a system seems drastically different, all of the components are analogous to a belt-and-pulley system and lead to the same results -- a continuously variable transmission. Here's how it works:

The wheels can rotate along two axes. They spin around the horizontal axis and tilt in or out around the vertical axis, which allows the wheels to touch the discs in different areas. When the wheels are in contact with the driving disc near the center, they must contact the driven disc near the rim, resulting in a reduction in speed and an increase in torque (i.e., low gear). When the wheels touch the driving disc near the rim, they must contact the driven disc near the center, resulting in an increase in speed and a decrease in torque (i.e., overdrive gear). A simple tilt of the wheels, then, incrementally changes the gear ratio, providing for smooth, nearly instantaneous ratio changes.


Continuously variable transmissions are becoming more popular for good reason. They boast several advantages that make them appealing both to drivers and to environmentalists. The table below describes some of the key features and benefits of CVTs.

In the next section, we'll look at what it's like to drive a CVT-based car.

Sold between 1989 and 1993, the Justy never attracted the attention of American drivers. So what's different about newer CVT-based cars -- cars like the Saturn Vue, the Audi A4 and A6, the Nissan Murano and the Honda Insight? The best way to answer that question is to take one of these cars for a "test drive." The animation below, which compares the acceleration of a car with a CVT to one without, gives you a good feel for the experience.


When you step on the gas pedal of a car with a continuously variable transmission, you notice the difference immediately. The engine revs up toward the rpms at which it produces the most power, and then it stays there. But the car doesn't react immediately. Then, a moment later, the transmission kicks in, accelerating the car slowly, steadily and without any shifts. In theory, a car with a CVT should reach 60 mph (100 km/hr) 25-percent faster than the same car with the same engine and a manual transmission [ref]. That's because the CVT converts every point on the engine's operating curve to a corresponding point on its own operating curve.

CVTs are equally efficient on hills. There is no "gear hunting," because the CVT cycles steplessly down to a gear ratio appropriate for the driving conditions. A conventional automatic transmission shifts back and forth trying to find the right gear, which is far less efficient.

With all of their advantages, CVTs do have some shortcomings. In the United States, they are still trying to overcome an image problem. The Subaru Justy, for example, was known as a gutless micro-car. Traditionally, belt-drive CVTs were limited in the amount of torque they could handle and were larger and heavier than their automatic and manual counterparts. Technological advances have put CVTs in the realm of their competition -- the Nissan Murano's CVT can handle its 3.5-liter, 245-horsepower V6 engine -- but first impressions are hard to overcome.

For more information on continuously variable transmissions and related topics, check out the links on the next page.