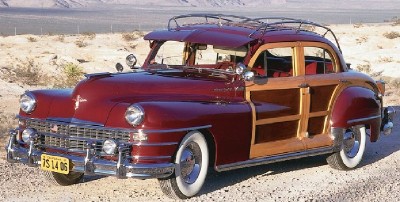 The 1947 Chrysler Town & Country was one of Chrysler’s best sellers in the years following World War II.

Postwar inflation pushed prices up dramatically. For example, a Royal business coupe that had cost a little more than $1000 in 1942 was over $1400 in '46. Prices would continue rising through decade's end, when a Crown Imperial went for nearly double its 1940 figure. Even so, Chrysler ranked among the top-10 in industry production for 1947-48.

The '48 Chryslers were just carryover '47s, though the six-cylinder T&C sedan was dropped at midyear, leaving the straight-eight convertible to carry on alone. The latter would prove the most numerous early T&C, with total 1946-48 production of 8380 units. Like all T&Cs through 1950, they've long been bona fide collectibles.

Chrysler planned a redesigned Silver Anniversary line for late '48, but ran into delays. Thus, existing models -- save the ragtop T&C -- were sold through March 1949 at unchanged prices, though none of these "first-series" '49s were built in that calendar year. Though streamlined styling with integral, skirted fenders had been considered for the all-postwar "second-series" '49s, Keller insisted on bolt-upright bodies with vast interior space. He got them, but with some loss in sales appeal. Output fell to some 124,200 for model-year '49, and Chrysler slipped back to 12th in the industry race.

Chrysler-based customs were still around in the late '40s, many built by Derham of Rosemont, Pennsylvania. In 1946-48 Derham offered a Crown Imperial town limousine, as well as numerous one-offs such as a dual-cowl Imperial phaeton and a New Yorker coupe that resembled a Lincoln Continental with a Chrysler front end. Derham also tried the padded-top treatment on a handful of '49 New Yorker sedans. Chrysler itself built custom formal sedans, and A.J. Miller of Ohio did a long-wheelbase limousine/hearse. Wildest of all was a promotional 1946-48 New Yorker parade car done up as a giant Zippo lighter.

Chrysler entered the '50s as a lower-medium-price make with seven series and 24 models. By 1959 it was an upper-medium line with 15 models spanning four series. Styling and engineering improved rapidly, and the dowdy L-head cars of 1950 gave way to exciting high-performance machines by mid-decade. Chrysler also had some of the best-looking tailfins of the age.

Those fins, which premiered as tack-ons for '55, were the work of Virgil M. Exner, who came from Studebaker to head corporate styling in 1949. Exner favored "classic" design elements: upright grilles, circular wheel openings, rakish silhouettes. But the practical, boring boxes of K.T. Keller (then preparing for retirement) weren't selling, and before Exner could get out anything completely new, Chrysler Division's yearly volume had dropped from 180,000 to barely 100,000.

For more on the amazing Chrysler, old and new, see: