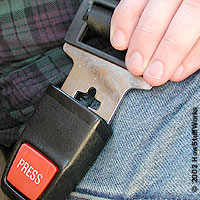 The basic idea of a seatbelt is very simple: It keeps you from flying through the windshield or hurdling toward the dashboard when your car comes to an abrupt stop. But why would this happen in the first place? In short, because of inertia.

Inertia is an object's tendency to keep moving until something else works against this motion. To put it another way, inertia is every object's resistance to changing its speed and direction of travel. Things naturally want to keep going.

If a car is speeding along at 50 miles per hour, inertia wants to keep it going 50 mph in one direction. Air resistance and friction with the road are constantly slowing it down, but the engine's power compensates for this energy loss.

Anything that is in the car, including the driver and passengers, has its own inertia, which is separate from the car's inertia. The car accelerates riders to its speed. Imagine that you're coasting at a steady 50 miles per hour. Your speed and the car's speed are pretty much equal, so you feel like you and the car are moving as a single unit.

But if the car were to crash into a telephone pole, it would be obvious that your inertia and the car's were absolutely independent. The force of the pole would bring the car to an abrupt stop, but your speed would remain the same. Without a seatbelt, you would either slam into the steering wheel at 50 miles per hour or go flying through the windshield at 50 miles per hour. Just as the pole slowed the car down, the dashboard, windshield or the road would slow you down by exerting a tremendous amount of force.

It is a given that no matter what happens in a crash, something would have to exert force on you to slow you down. But depending on where and how the force is applied, you might be killed instantly or you might walk away from the damage unscathed.

If you hit the windshield with your head, the stopping power is concentrated on one of the most vulnerable parts of your body. It also stops you very quickly, since the glass is a hard surface. This can easily kill or severely injure a person.

A seatbelt applies the stopping force to more durable parts of the body over a longer period of time. In the next section, we'll see how this reduces the chances of major injury.