How do you pick the fastest lane to drive in? 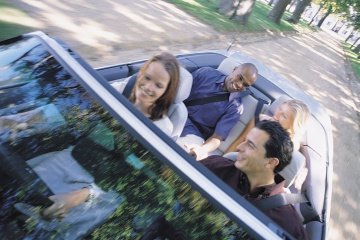 Being late is stressful and no one wants to wish they had chosen a different lane to make it to their destination quicker.
Digital Vision/Thinkstock

When you're faced with rows of brake lights at the end of a long day, it can be enticing to think that if you simply pick the "right" lane to drive in, you'll somehow zip through traffic at record speed. Unfortunately, traffic doesn't work that way and, for the most part, your commute will take exactly the same amount of time no matter which lane you choose.

By its very nature, traffic congestion is uneven. It bunches up and stretches out like an accordion as incidents occur or resolve. Since each lane performs this jamming and unjamming motion at different times, it might seem like some lanes are moving faster than others. For the most part, however, all lanes travel at the same average speed, so switching lanes in an effort to save time is generally an exercise in futility [source: Vanderbilt].

Not only is chronic lane switching largely ineffective – one study found that habitual lane changers save about four minutes over an 80-minute commute – but it's also surprisingly dangerous [source: Vanderbilt]. Switching lanes leaves you vulnerable to two lanes of traffic at once, increasing your risk of an incident. It taxes your brain by forcing you to make judgement calls, and leaves you vulnerable to blind spot hazards. Even worse, switching lanes can actually make traffic worse because it forces every other driver in the lane to accommodate your move [source: Redelmeier and Tibshirani].

Still think you can game the system? Even if you decide that shaving a few minutes off your commute is worth the effort and risk associated with switching lanes, you might not actually be all that good at determining whether one lane is moving faster than another.

In traffic simulation studies where both lanes are going the same average speed, researchers have determined that the way traffic moves creates an illusion that convinces drivers that one lane is faster than the other. Since cars spread out when going fast and bunch up when going slow, you spend more of your time on the road being overtaken than you do passing other cars. This is true even when speeds in both lanes are identical. When you notice that a bunch of cars are overtaking you, you may convince yourself you're in the "slow" lane, when actually, cars in neighboring lanes will reach their destination at the exact same time as you even if you stay in your lane the entire time [source: Redelmeier and Tibshirani].

Even people outside the vehicle can be fooled by this phenomenon. Researchers attached a camera to the side of a car to film traffic in adjacent lanes. They showed a section of the video to a class of driving students. In the clip they used, the lane that the test car was in was traveling slightly faster than cars in the adjacent lane. Despite this fact, 70 percent of those who saw the video agreed that the adjacent lane was faster and 65 percent said they would switch to the "faster" lane [source: Redelmeier and Tibshirani].