Will using a cell phone at a gas pump make it explode? 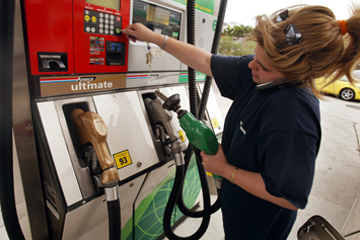 Cell phones have long been thought to be a possible cause of gas-station fires. But there's actually another culprit ... and another reason you should keep your phone holstered while you're at the pump.
Joe Raedle/Getty Images

While gas stations have posted warnings against cell phone use, and urban legends recount fires started by cell phones at gas tanks, there has been no documented case of a cell phone starting a fire at a gas station [source: Petroleum Equipment Institute]. In fact, researchers have actively tried (and failed) to use cell phones to start gas pump fires [source: MythBusters].

What started the idea that cell phones and gas pumps don't mix? One culprit could be the little shock you get when you shuffle across the carpet. While cell phones haven't been shown to ignite fires at gas stations, static electricity has. When you gas up your car, you're likely careful not to spill a single drop (gas is expensive!). Still, gas vapors hang out around the pump nozzle, even when it's inserted in your gas tank. Those vapors can be ignited by static electricity. Once they get ignited, the fire travels wherever the gas is — inside the pump, inside the car's fuel tank — and the next thing you know, there's a big boom and you're going to have a lot of explaining to do to your insurance company.

You're not safe from static electricity just because most gas stations are short on shag rugs. If you like to start the fuel pump, then get back in your car (because you're cold or lazy and don't want to stand outside) and then go back to return the nozzle to the pump, your little visit inside your car might have charged you up enough to ignite those gasoline fumes. In fact, some experts have found charges of up to 60,000 volts on people who'd gotten in and out of their cars while refueling [source: Hunter].

So even though your cell phone isn't going to set off a fire at the gas station, it's still a good idea to leave it in the car while you fill up. Getting gas is boring, but you really do need to be aware of your surroundings so you can respond to any issues with the pump. Gas stations also tend to be filled with moving cars, so you need to be paying attention in case a 1998 Plymouth Voyager comes barreling at you from over by the air pump. Using your cell phone at a gas station won't make you burst into flames, but that doesn't mean it's a good idea.

Why Does My Tire Pressure Light Come on When It's Cold?
Does tinfoil on your hubcaps bypass police radar?
Is There a Scientific Strategy for Finding a Good Parking Spot?