Can you blow up a car by shooting the gas tank? 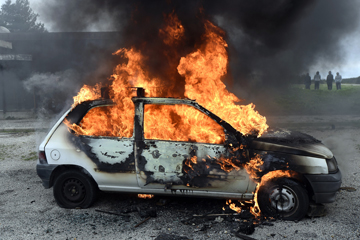 Could this fire have been caused by a bullet hitting the car's fuel tank? (Probably not.)
(PASCAL GUYOT/AFP/Getty Images)

On one hand, it seems like it would be really difficult to cause enough damage to a gas tank to cause a fire or an explosion. After all, car manufacturers put a lot of reinforcement around the entire fuel system. They have to. A hard enough hit to a fuel tank will almost certainly result in the fatalities of anyone in or close to the car. The National Highway Traffic Safety Administration (NHTSA), the government agency that creates and enforces safety standards for vehicles sold in the United States, has really strict regulations in place to make sure that a fuel tank won't be impacted in a crash. They do this by conducting side-impact and rear-impact tests on all new cars, calculating the damage to ensure it falls within acceptable standards and then releasing the data to the public in the form of safety ratings. (The NHTSA also standardizes non-gasoline systems, such as hydrogen, compressed natural gas and electric vehicles' batteries.)

On the other hand, well, cars do fail those tests sometimes, which implies that gas tanks might not be protected as well as they should be. Also, getting rear-ended or T-boned isn't quite the same as getting shot at, is it? So what happens when the impact is caused by an extremely fast bullet (one that also happens to be hot from friction) rather than blunt force? Television and movies would have us believe that a car's fuel tank will blow up instantly anytime a shot penetrates the rear of the car. Even when filmmakers are a little lax with their accuracy, it's somewhat plausible. After all, gas is highly flammable. That's how and why it's able to power your engine. It's not unfathomable that firing a few hot bullets into the tank could replicate the detonation process that happens in the car's engine, and that's what makes this hypothetical scenario (as well as those action-movie scenes) so believable.

To finally put this theory to rest, Discovery Channel's "MythBusters" gave it a shot. A Cadillac sedan was shot with several bullets, all aimed right into the fuel tank — and nothing happened. The six shots went in one side and right out the other, without any drama whatsoever. There was no explosion and there was no fire. So far, no one else has stepped up to the plate to replicate this experiment (at least, not that we know of) so the "MythBusters" test provides the most compelling visual evidence. In other words, we're not going to say it's completely impossible to blow up a car by shooting at the gas tank; we're just going to say that, so far, there's no evidence that it's ever actually happened.