5 Completely Wrong Ways to Drive in the Rain 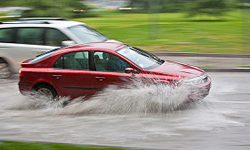 "Rain, rain, go away/Come again some other day/Preferably when I don't have to drive over 5 miles of slick asphalt to buy caulking materials to patch the leak in the ceiling that's causing water to puddle on my expensive new Persian rug."

No, that old children's nursery rhyme never worked for us either, so we had to do it the hard way -- we had to learn how not to drive in the rain.

That couldn't be so hard, could it? You might be surprised. Some bad driving habits, ones that don't cause trouble when the road is dry, are so deeply ingrained that it's awfully hard to get rid of them when Mother Nature is dumping her liquid love all over the landscape in an attempt to make rosebuds bloom and cause shiny chrome fenders to crumple. But fear not, dear reader. If there's a 100-percent chance of precipitation on your local roads and you absolutely, positively have to be someplace in half an hour, we've compiled a quick list for you of driving habits you should immediately get rid of. So pop some multivitamins to enhance those rusty memory cells of yours and read the next five pages before you open that ratty old umbrella and venture out into the rain-drenched wilderness.

You'll thank us for it you when you get back home with your car -- and your spinal cord -- in one piece.

Don't drive toward the sides of the road.

Okay, this isn't always possible. You might be on a narrow one-lane road and the sides may be the only place you have to drive. There might be a long line of cars in the middle lane already, forcing you to the stay to the left or the right. But here's the theory:

Roads are constructed so that they're highest in the middle. The difference may be slight, but it causes water to run off the center hump (actually, it's called a crown) and drain toward the edges. If you're driving in the rain you want to avoid standing water, which means that you want to be where the water isn't -- and that's in the center of the road. No, the center won't be dry either, especially if it's still raining, but it's going to be the driest place around that isn't in somebody's garage.

Don't leave your headlights off (but don't make them too bright either). 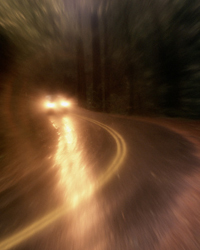 Headlights help you be seen, but you don't want to unintentionally blind other drivers with them.
Thomas Winz/Photolibrary/Getty Images

We sometimes assume that, just like everything else, our headlights are all about us. They help us see what's in front of us, kind of like a pair of big flashlights that don't need their batteries replaced every time your power goes out. Actually, when it's raining, what you need your headlights for, even in the daytime, is so that other people can see you. In the murky gloom of a rainstorm, even a light drizzly one, the lack of sunlight makes the world look like one big mass of overcooked oatmeal and seeing a pair of headlights coming out of that oatmeal will remind other drivers that -- whoops! -- there's something in that oatmeal besides raisins!

But if headlights help you be seen, you don't want to unintentionally blind people with them either. Other drivers are already having enough trouble finding their way around. Don't dazzle them by turning on your high beams.

Don't drive if the windshield is so covered with rain that you can't see!

Okay, this one sounds like a no-brainer, but isn't it amazing how many people seem to have been born without brains? It doesn't matter if you know the road so well that you could drive it blindfolded while sound asleep, you still shouldn't drive it while there's enough water on the windshield to provide a home for goldfish. Not being able to see ahead, you don't necessarily know what's there. There could be stopped cars in front of you that you can't see. There may be pedestrians wandering around befuddled in your path. You may not even be driving as straight as you think you are and could be heading straight for a bridge abutment. When visibility gets low, pull off the road as quickly as it's safe to do so. Stop your car. Pop a CD in the dashboard player and listen to soothing music while you wait for things to clear up again. Get out your cell phone and have a conversation with your best friend (but only when you're not driving, remember?). Turn to the person next to you and get to know them better. Wonderful marriages have resulted from less auspicious beginnings.

Don't drive through a river.

Okay, we don't mean that literally, but if you see water flowing across the road from one side to the other and don't know how deep it is, don't try to drive across it! Let's say that again in case the rain was too loud for you to hear it the first time: Don't try to drive across it! Every year hapless drivers figure their cars won't be harmed by fording a tiny little stream of rainwater that couldn't be deeper than, oh, an inch or so. You'd be surprised how many of these people then find themselves swept away, off the road and into a vicious current of rainwater that could carry them for hundreds of feet as they desperately try to get out of their car and grab a tree limb to keep from disappearing below the waterline. Better to wait out the storm and the rainwater than to lose your life -- and quite possibility the lives of those near and dear to you -- because you thought a little water couldn't hurt you.

And even if the water isn't moving, if the bottom isn't visible you don't know what's underneath it. There could be a pothole the size of a swimming pool. There could be broken glass or nails that fell off a truck. If you can't see the bottom, don't risk putting your tires on the submerged pavement -- or your life on the line. Either stop a safe distance from the water's edge or, if possible, find a way to drive around it.

Don't drive too fast for conditions! 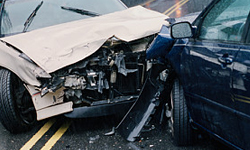 Slow down when conditions are bad and roads are wet.
Reza Estakhrian/Photographer's Choice/Getty Images

Speed limits exist to tell you how safe it is to drive under good conditions. When conditions are bad and roads are wet, speed limits are worthless. Drive well under them -- and the worse the conditions, the lower the speed you should drive.

The worst danger of driving too fast in rain is hydroplaning. No, hydroplaning isn't something you do when you're flying off on a fishing expedition in a Cessna that's equipped with pontoons. Hydroplaning is what happens when your car thinks it's a boat while it's still on the highway.

Usually your tires can slice their way through the water in front of them and keep in contact with the surface of the road. But when the road is wet and you're going too fast, your car can actually begin to float on top of the water and the tire tread loses contact with the road surface. This is bad. Boy, is this bad! When your tread loses contact with the road surface, you can no longer steer. You can no longer brake. This is what happens when you hydroplane. And you often don't know that you're hydroplaning until you hit the brakes and the car goes skidding out of control. Therefore it's better not to travel at hydroplane speeds to begin with.

What do you do if you realize you're hydroplaning and are already out of control? First off, don't panic (though, trust us, you'll be tempted to). Don't hit the brakes, because that just makes it worse. Let up on the accelerator so that any remaining traction can slow your speed. And drive straight. Don't try to turn. If the car is veering off in a direction you don't want to go, don't fight it; just follow your wheels. And as the car slows, suddenly (almost magically), you'll be back under control.

At this point we recommend getting off the road and giving yourself time for your heart rate to slow back down. You'll need it. 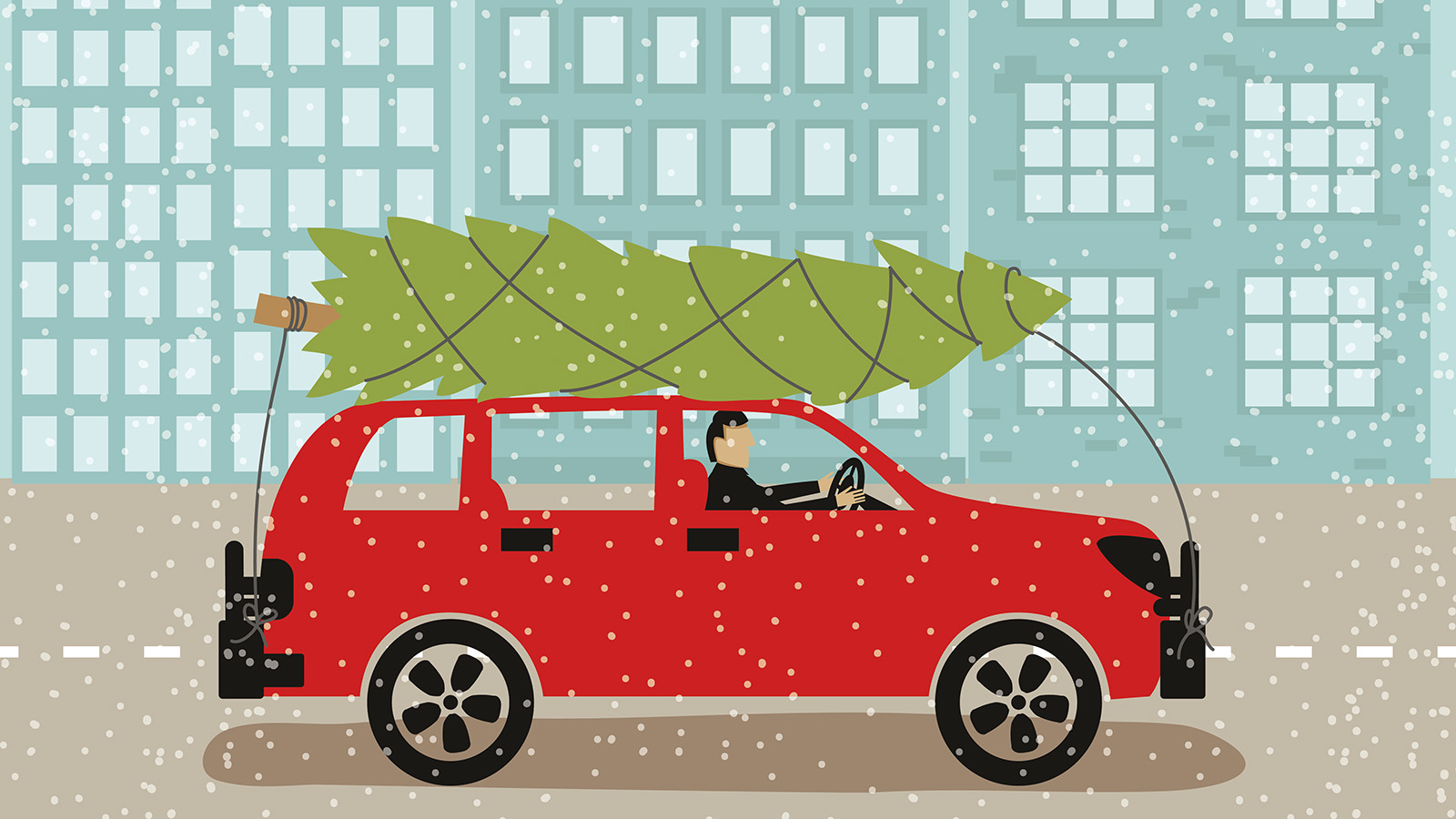 Don't be the guy who loses their Xmas on the road between the lot and their house. HowStuffWorks has tips to help you get it home safely.

Author's Note: 5 Completely Wrong Ways to Drive in the Rain

When I was 17 years old (a lot longer ago than I'd care to admit), I had my first car accident. It was, yes, on a dark and rainy night. Worse, it was on a winding country road. I turned a corner and there was a long line of cars stopped at a traffic light. I slammed on the brakes and nothing happened. I just kept moving, right into the rear of the car at the end of the line. The hood of my Ford Mustang crumpled like an origami swan. This was my introduction to hydroplaning.

Fortunately, no one was hurt, though the woman and her two kids in the car I'd hit were a bit shaken up. So was the guy riding in my passenger seat. And so was the fellow driving the car behind me. (I knew him. He was my high school drama teacher. We were on our way to put on a production of "Our Town" at a local old-folk's home.)

So this article was written from the heart, the one that's still beating because I had fortunately just started to slow down before the accident happened. If I hadn't slowed down -- well, I hope the writer who got this assignment would have enjoyed it as much as I did.

It's a pity I hadn't read my own article before I went out in the rain that night. Or some of these articles: