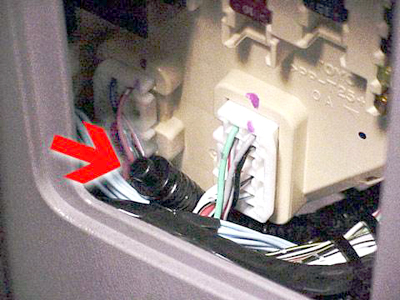 A valet switch is a manual shut-off that temporarily disables the alarm system (so you can let the valet park your car, for example). The valet switch is hidden in an out-of-the-way spot in the car. The switch pictured here is mounted under the car's fuse access panel.
Photo courtesy Directed Electronics

­The most basic element in a car alarm system is the door alarm. When you open the front hood, trunk or any door on a fully protected car, the brain triggers the alarm system.

Most car alarm systems utilize the switching mechanism that is already built into the doors. In modern cars, opening a door or trunk turns on the inside lights. The switch that makes this work is like the mechanism that controls the light in your refrigerator. When the door is closed, it presses in a small, spring-activated button or lever, which opens the circuit. When the door is opened, the spring pushes the button open, closing the circuit and sending electricity to the inside lights

All you have to do to set up door sensors is add a new element to this pre-wired circuit. With the new wires in place, opening the door (closing the switch) sends an electrical current to the brain in addition to the inside lights. When this current flows, it causes the brain to sound the alarm.

Door sensors are highly effective, but they offer fairly limited protection. There are other ways to get into the car (breaking a window), and thieves don't actually need to break into your car to steal it from you (they can tow your car away). In the next couple of sections, we'll look at some of the more advanced car alarm systems that protect against craftier criminals.