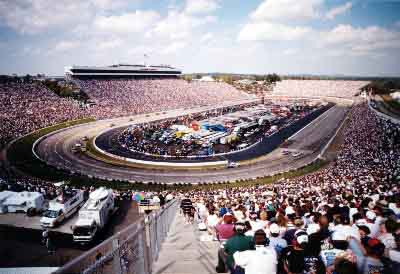 NASCAR races at about two-dozen tracks every year, and no two tracks are the same. There are ovals, tri-ovals, quad-ovals and road courses. There are short tracks, speedways and super speedways that range from 0.5 to 2.5 miles long.

Track safety is affected by the degree of the track's banking, the steepness built into the track. Tracks with a steep banking allow cars to go faster, especially around the corners, which is where a lot of the fatal accidents have occurred. If a track's banking were 90 degrees, then the track would be perpendicular to the ground. Obviously, no tracks are banked at a perpendicular angle.

There is no set standard for the degree of banking designed into a NASCAR track. Banking on NASCAR tracks range from 36 degrees in the corners to just a slight degree of banking in the straighter portions. Of course, road courses have no banking. Some believe that reducing the banking in the corners of oval tracks could prevent a lot of the fatal wrecks that we've seen recently.

Car racing is a dangerous sport -- possibly the most dangerous sport. In NASCAR, drivers are racing cars that weigh more than 3,000 pounds, speeding around a track at about 200 mph. Adding to the danger is the fact that cars usually race in tightly packed groups, and sometimes race three cars across on tracks that are only 50 feet (15 m) wide. Under such conditions, there are going to be accidents, and crashes. The purpose of the safety equipment is to minimize the harm caused when one of these cars veers out of control.

No track is the same, but most of them have one thing in common -- concrete retaining walls. The concrete walls are in place to contain a car that rides out of control. However, as we've seen, concrete walls don't absorb any energy, making any crash into one potentially deadly. Most NASCAR drivers who have died on the race track have died from crashing into the wall. One solution being proposed to make tracks safer is energy-absorbing walls, or "soft walls."

In the next section we’ll look at the different types of soft walls.