Why is it called "Top Fuel"? 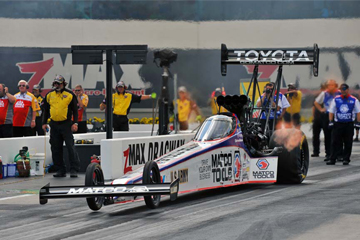 The people who built the predecessors to Top Fuel cars -- engineers, mechanics and amateur drag racers around the world -- eventually came to the conclusion that a nitromethane blend is the best type of fuel for these particular types of engines. Nitromethane is also known by its chemical makeup, CH3NO2. It's a dangerous and volatile substance that's often used for pesticides, medicine manufacturing, heavy duty cleaning solvents and even rocket fuel. Somehow, though, Germans in the 1930s and Americans in the 1940s independently discovered that nitromethane could also power race cars. Sometimes, they were victorious; other times, the results were disastrous, since the fuel is so dangerous to work with. But they kept on, and those experiments over the decades helped develop the Top Fuel cars we have today.

Nitromethane is particularly volatile, especially since it doesn't need to mix with air to combust. If a Top Fuel car's engine is not running properly and unburned fuel builds up in the engine, it can explode with a force strong enough to crack the engine's head or block. It can also reportedly explode upon almost any kind of impact [source: Davis]. This is one of the explanations for the flames that come from the exhaust pipes -- unburned fuel heats up as it exits through the exhaust system and ignites when it comes into contact with the atmosphere.

An engine that runs on nitromethane is typically of much lower compression than a gasoline engine (which seems counterintuitive), because lower compression engines generally need less powerful fuel [source: Davis]. Unlike gasoline, though, nitromethane carries oxygen, so the engine doesn't need to force in as much air for the combustion cycle that makes power, allowing it to run at lower compression. This is just one of the finicky tolerances that a Top Fuel mechanic needs to watch carefully so the car remains stable under load. The engines and components are under so much pressure that all of the connections need to be inspected and repaired on a regular basis. For example, the welds on the custom headers start to fail after about 50 or so runs [source: Mazlumian].

Currently, Top Fuel and Funny Cars run on a blend that's 90 percent nitromethane and 10 percent methanol, according to NHRA rules [source: Davis]. The methanol helps suppress detonation, which makes the fuel more stable. The fuel is tricky to blend at the proper ratio because it's mixed by weight, which depends on its temperature. And to further complicate matters, the fuels themselves can vary in purity by a few percentage points. Blending top fuel, for stability and premium power, can yield varied results; but in most cases, the fuel works as intended. Nitromethane can be blended with substances other than methanol to help boost its power potential, but such tactics are banned by the NHRA and most other racing organizations, in part because other fuel blends are more dangerous and also harder to regulate.