How Launching a Boat Works

The Physics of a Boat Launch 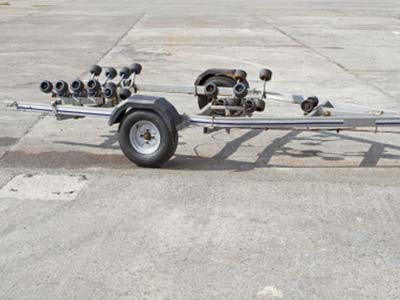 The rollers on this boat trailer make it easier to launch and retrieve a boat without damaging it.
Dave White/iStockphoto

To really understand a boat launch, it's helpful to understand Newton's laws of motion. The first law of motion states that an object tends to remain in its current state of motion until it encounters an external force.

When an object is in motion, it has momentum. Momentum specifically refers to mass in motion. An object's momentum depends on its mass and velocity. Velocity, like acceleration and force, is a vector quantity. That means it has both a magnitude (amount) and a direction. Speed, on the other hand, is a scalar quantity -- it only has a magnitude.

Momentum (p) is equal to the mass (m) of an object multiplied by its velocity (v), which we express mathematically as:

That means the momentum of an object increases as velocity increases. It also means if two objects with different masses move at the same velocity, the object with the greater mass has more momentum.

The second law of motion deals with acceleration, which refers to the rate at which an object changes its velocity. The law states that the acceleration of an object is directly proportional to the force applied to the object and inversely proportional to the object's mass. That means the more force you apply to an object in a particular direction, the faster it will move in that direction. But it also means that an object with more mass will have a lower rate of acceleration than a less massive object when the same amount of force is applied to both.

We can express the second law of motion as an equation:

When you drive your vehicle down a boat ramp, the vehicle, trailer and boat are all moving as one mass together at the same velocity. If you were to jam on the brakes, the vehicle would stop first, followed by the trailer attached to the vehicle and finally the boat. If the boat's momentum is great enough to overcome the friction holding it in place on the trailer, it will roll off the trailer and into the water (or on the ground if you stopped short).

Once the boat hits the water, we have a new set of physical factors to consider. The most important one is buoyancy. Buoyancy refers to the upward force exerted on an object that is in a fluid. An object's buoyancy depends on the relationship between the object's weight and the volume of the water it displaces. The upward force exerted on an object is equal to the volume of water it displaces. If the buoyant force is equal to or greater than the weight of the object, the object floats. In physics, this is known as the Archimedes Principle.

For a boat to float, enough of the boat's surface must make contact with the water to generate the proper force of buoyancy. If only a small part of the boat touches the water, the volume of displaced fluid won't be great enough to counteract the boat's weight and keep it afloat.

There are other elements of physics at play when launching a boat. For example, the engine of your vehicle has to generate the right amount of torque to go up the boat ramp. You can also use a combination of physics and trigonometry to figure out the ideal slope for a boat ramp. So when you go boating, remember that you're really doing science.

To learn more about boating, set sail for the links below.