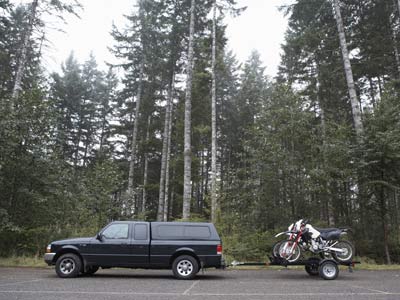 Using a hitch jack can make it much easier to tow large items from one place to another.
Ryan McVay/Digital Vision/Getty Images

Picture this: you're ready to hitch your boat onto the back of your truck and take the family out for a day at the lake. Your truck has a trailer hitch on the rear bumper, so you think you're ready to start towing the boat.

This is where a hitch jack comes in. The jacks that come with most cars aren't big enough to lift up something the size of a boat, so you'll need this piece of towing equipment to get the job done.

­Hitch jacks, also known as trailer jacks or tongue jacks, are used to raise and stabilize a trailer so it can be attached to the towing vehicle. It's one of many hitch accessories used to make the process of towing a little easier.

Typically, hitch jacks attach onto the trailer's tongue - the long beam at the front that extends out and connects with the towing vehicle. The jack is secured to that beam and extends vertically to the ground, where it has a metal base or even a wheel in some cases.

A hitch jack isn't like the tire jack that comes with most cars, which is a diamond-shaped piece of metal that expands outwardly as you turn an iron, raising the vehicle off the ground. Most commonly, hitch jacks include a crank that turns internal gears, which then extends out of a metal shaft. The shaft raises the trailer off the ground so that it can be properly hitched onto the towing vehicle [source: Free Patents Online].

Here's how to use one:

In this next section, we'll discuss what to keep in mind when buying hitch jacks. 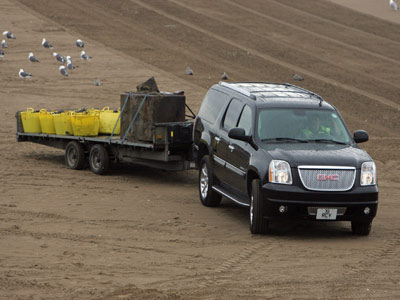 Since hitch jacks carry a lot of weight, it's important to follow safety guidelines when using them.
Matt Cardy/Getty Images News

First, when choosing hitch jacks, it's important to know your trailer and its tongue dimensions. For example, you will see jacks that say "fits tongues up to 3" x 5." Some hitch jacks bolt onto the tongue itself; others require drilling, and some do not come with installation equipment.

Next, know how much you'll be carrying. Your jack needs to be strong enough to lift what you'll be towing. Fortunately, there are a wide variety of jacks out there to suit your hitch, from ones that can pump up an 800-pound mini-trailer with a motorcycle on the back to heavy-duty jacks that can support 5,000 pounds or more.

You should also note the ground clearance of the tongue. The jack won't do any good if it can't reach the pavement, so jacks come in different lengths to suit different tra­ilers. Some jacks come with wheel casters on the bottoms. These small wheels aren't meant to be left on while you're driving, they do make storing the trailer in your garage a little easier. If you're towing a boat, get a hitch jack that won't corrode or rust with exposure to water.

Finally, you may want to consider purchasing a power jack. Rather than having to manually crank the trailer up and down, which can be time consuming and physically difficult, these jacks plug into the vehicle's battery and raise and lower themselves. These are often more expensive than manual towing accessories.

In the next section, we'll learn how to stay safe when using a hitch jack. 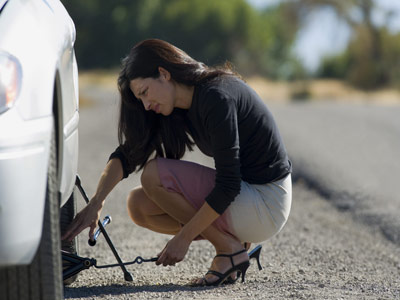 Just like changing a tire with a jack on your car, there are safety precautions you must take when using a hitch jack.

First, put chocks on both sides of the trailer wheels to keep them from moving. These can usually be purchased wherever towing equipment and hitch accessories are sold. Next, make sure you raise the trailer on level ground. Use a scale to measure and balance the weight load properly. Trailer jacks support a lot of weight, so if your jack becomes unbalanced or can't support the weight, it could fall on you or roll away.

Finally, if you're using an electric jack, disconnect the towing vehicle's negative battery cable before you begin working so you don't accidentally electrocute yourself or damage the electrical components.

If you're mindful of the safety concerns involved with using hitch jacks, towing that boat to the lake can mean lots of fun for you and your family. For more information on hitch jacks, please see the links on the next page.