Here's a little bit of advice for the next time you find yourself shopping around for a trailer: Get one with wheels. That may sound obvious. After all, if you're going to tow it behind a truck and venture onto the highway, wheels are mandatory. You can't just drag your payload behind the truck without damaging your goods and slowing down your progress. It all comes down to friction. Objects roll better than they slide, whether you're talking about a giant block of stone in the desert or the inner workings of a wheel assembly.

Just as you wouldn't want to drag a wheelless trailer down the road, you also wouldn't want friction to exist between the wheel and the wheel assembly. Simply snapping a wheel onto a spoke might be a great way to get a toy car rolling, but a wheel in a trailer needs to rotate smoothly and with as little friction as possible. In addition, you don't want the trailer's wheels to decelerate due to the weight of the radial load pressing down from above or the thrust loads that occur when you go around a tight curve.

Coping with these demands is the purpose of trailer bearings. Trailer wheel hubs contain two sets of roller bearing assemblies, each between the inner race and the outer race. A roller bearing assembly roughly resembles a tapered, cylindrical bracelet with horizontal metal rollers caged in it. It absorbs the thrust and radial loads over the long, rolling surface areas of the bearings while also cutting down on friction. To learn all about bearings and their other varied uses, read How Bearings Work.

Grease keeps the trailer bearings lubricated and works as a coolant against heat caused by friction. A rubber-lipped seal helps to hold all the grease in and the dust and water out. Boat trailers pose the most risk on both counts due to the rapid cooling that takes place when their wheels are submerged. The air inside the wheel hub contracts, creating a vacuum. The vacuum can then suck in water and dust from outside. If water makes its way in there with the bearings, it's only a matter of time until corrosion and rust join the fun.

Eventually you're probably going to have to open up the wheel hub and grease or replace the bearings to keep things rolling smoothly. Find out how on the next page.

If you have a bearing protector installed on your trailer wheels, all you'll need is a grease gun to squirt in more oil. Bearing protectors seal off the bearings and grease from outside elements, but not every model is effective. 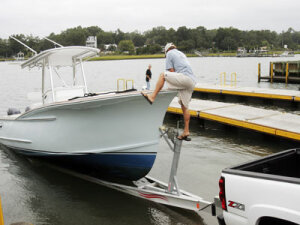 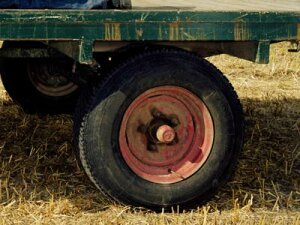 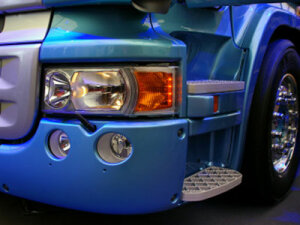 How Stairs and Steps Work