What should I do when my brakes lock? 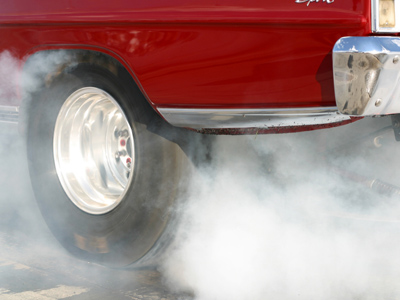 If you slam on your brakes and they lock up, you could burn a lot of rubber. See more brake pictures.
tilsonburg/istockphoto.com

­You're speeding over a patch of black ice or wet leaves when suddenly you try to stop -- and nothing happens. Instinct tells you to slam on the brakes, but that will just cause them to lock up, leaving you sliding down the street.

This used to be a common problem before anti-lock brakes (ABS) became popular. Non-ABS brakes lock up when hard, steady pressure is applied. If you stop fast enough to have your tires screech on the road, chances are your brakes will lock. If you're driving a vehicle that does not have ABS brakes, as soon as you feel the brakes begin to lock, release brake pressure and pump the brake until you come to a stop [source: Car Talk]. Pumping requires pushing and releasing the brake pedal multiple times in quick succession.

In an ABS-equipped vehicle, you'll feel a pulsating in the brake pedal during hard stops, or if the vehicle loses traction. This is perfectly normal, as the brake system is pumping the brakes for you, freeing up any locked wheel and leaving you in control of the vehicle. There's nothing wrong with the pulsating brakes. Don't release them because the car is doing the work for you [source: Ofria].

Anti-lock­ brakes usually don't lock up unless there's a brake problem. Some of the brake issues that can cause ABS brakes to lock up include bad brake pads, calipers on disc brakes, cylinders on drum brakes or wheel bearings.

­Identifying any brake problems is of the utmost importance. When brakes lock up, the vehicle may veer sharply to the left or right, and the back end may fishtail causing the driver to lose control [source: Car Talk]. If this happens while you're driving, pump the brakes consistently until you come to a complete stop, and get the car to a mechanic as soon as possible.

What are the different types of brake fluid?
How Disc Brakes Work
How Power Brake Conversion Works