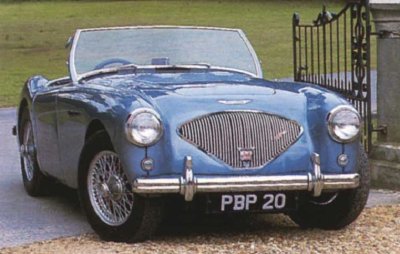 Though the four-cylinder Austin-Healey was built for only 3½ years, there were four distinct variations. The original car, built until the autumn of 1955, was coded (and is now colloquially known as) BN1. The following year, it gained a new 4-speed gearbox (still with overdrive) to become the BN2.

Meantime, the Healey company (not BMC) developed and further refined a racing BN1 in 1954-55. Called 100S (S for Sebring), it featured a stripped all-aluminum body sans bumpers and had a much-modified 132-bhp engine. Only 50 were built, all intended (and mostly used) in competition. There were also 1159 examples of the 100M, a BN2 conversion with 110 bhp, duo-tone paint, and assorted body and chassis modifications.

The Healey 100 succeeded in establishing a fine reputation very quickly indeed, especially in the U.S., where enthusiasts found it offered everything a contemporary MG didn’t. In fact, most of the more than 14,000 BN1s and BN2s built were sold in America, making the name Austin-Healey a permanent part of sports-car love and lore.

To learn more about Austin-Healeys and other sports cars, see: