How Car Seats Can Keep You Cool 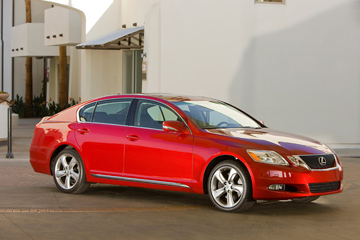 The Lexus GS 460 offers cooled seats, too.
Courtesy of Lexus, a Division of Toyota Motor Sales

Different car manufacturers implement air-conditioned seating in different ways. However, the standard model for air-conditioned seats, developed by scientists at the Department of Energy's National Renewable Energy Laboratory (NREL), works like this: The fabric of the car seat is a porous mesh, so air can flow through it. Multiple fans inside the seat produce air circulation, which blows through a diffusion layer that spreads the cooling effect throughout the seat and outward through the mesh, cooling the surface. This air may or may not be refrigerated. Even unrefrigerated air is important in keeping you cool in your car seat. A standard car seat blocks your body's built-in cooling system. Ordinarily you eject heat through your pores in the form of water vapor, which carries the heat invisibly into the air. Having a seat pressing against your back and bottom prevents this water vapor from escaping, causing it to condense into sticky sweat. It's like wearing a jacket in hot weather. But the porous covering of an air-conditioned seat allows your body's natural cooling system to work even when sitting down and keeps you cool by circulating air across your skin. The moving air carries your body's heat away.

But some air-conditioned car seats also use a cooling element. Like most air conditioners, these work on a compression, condensation, expansion cycle. For more details, see How Air Conditioners Work. The short version is that air conditioning operates on a very simple principle: When a gas (in this case referred to as a refrigerant) is compressed, it becomes warmer and when it expands it becomes cooler. This principle can be used to remove the heat from a room, a car, or even a car seat and carry it elsewhere. Until recently, the gas most commonly used as a refrigerant in air conditioning systems was Freon, the commercial name for a chlorofluorocarbon (CFC) manufactured by DuPont. However, CFCs have been found to be destructive to the Earth's atmosphere, creating holes in the ozone layer and contributing to global warming, and are now considered too dangerous for general use. So Freon has been largely replaced in automobile air conditioners by the hydrofluorocarbon HFC-134a.

In an air conditioner, this gas is run through a device called a compressor. Then it passes through a condenser where it cools into a liquid, dissipating its heat in the process. (The dissipated heat is released outside the cabin of the car.) Finally, the cooled liquid is passed through an expansion valve, where it turns back into a gas. The expansion of the gas makes it even colder. This process takes place within a closed loop consisting of coiled tubes, so that it can be repeated over and over. Air is forced past the part of the loop containing the cold gas and becomes chilled. Constant input of energy is required to compress the gas, which is why air conditioning uses up so much of your fuel.

Air-conditioned seats that use refrigerated air either contain a small cooling element based on this principle, or use air pumped from the main cooling element of the car's air conditioning system. Because the space being cooled is limited to a single seat, relatively little energy is required compared with normal car air conditioning. In the case of air-conditioned seats without a cooling unit, where the driver or passenger is cooled by the circulation of unrefrigerated air, the entire process requires less energy than is used to run a typical light bulb.

If your car doesn't come with refrigerated seats, several manufacturers would be happy to sell you air-conditioned seat cushions. These cushions have built-in fans and sometimes cooling units, and plug into the car's electrical supply. It's a cheap and easy way to keep yourself cool while stuck in traffic -- and to save the Earth's atmosphere in the bargain.