Flying Can Be a Scary Event 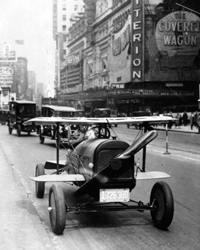 A car with wings and a propeller protruding from the radiator grille drives through Times Square, New York. This car was the invention of A.H. Russell of Nutley, New Jersey.
Hulton Archive/Getty Images

We've all heard the statistics that flying is safer than driving. In 2007, there were 44 fatalities from airline accidents and about 44,000 from driving accidents [source: Thompson]. But statistics like that don't stop 40 percent of people from having some sort of anxiety when flying [source: Murphy]. That's a pretty high percentage of people considering the fact that all you have to do when you fly is sit in a chair for a prolonged period of time, read a book and sip on some bubbly or ginger ale.

Obviously it's the fact that you're up in the air that gets people a little anxious. If we're all in flying cars someday, then statistically 40 percent of us will have some sort of apprehension about it. That's a lot of people flying next to you that might let their mild flying phobia inhibit their ability to operate their aeronautical vehicle.

Think about the people you see on your daily commute. Think of all the people you see texting while driving, reading a newspaper, putting on makeup or irrationally swerving between lanes. Now imagine being next to them hundreds or thousands of feet up in the air. That's enough to bump the rest of us who don't get nervous when we fly right into that other 40 percent statistic. .

We know what you're thinking: If flying is safer than driving then won't flying a car through the air be safer than driving it on the roads? Probably not. Consider the extensive training that commercial pilots go through and safety checks that airplanes receive regularly to ensure safe flights. The Federal Aviation Administration has a 17 chapter manual called the "Pilot's Handbook of Aeronautical Knowledge" that covers everything from principles of aerodynamics, weight and balance, weather, navigation, aero-medical factors and decision-making while flying [source: FAA]. Pilots need to know all of these general rules of flying in addition to their knowledge of the aircraft their flying.

Even if we all have to take a class to learn how to fly cars, which we'll talk about later, the chances are we won't be as skilled as airline pilots and won't have as many safety checks before we take off as commercial planes do now. So it's doubtful that when millions of people are flying cars, the safety records will be as good as they are for present-day commercial and private flights.

Still want a flying car? We understand; just be ready to pay for it. Go on to the next page to find out how expensive flying cars will be.