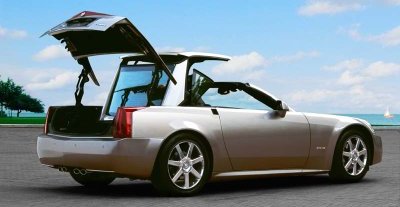 The 2004 Cadillac XLR boasted a power-retracting solid roof that pirouetted into the trunk.

With the CTS a certified success, Cadillac unwrapped a new two-seat convertible for 2004 that made everyone forget the old Allante. Called XLR, in line with the brand's adopted three-letter name scheme, it was basically a C6 Corvette engineered to Cadillac standards of quality and refinement. In fact, Team Corvette developed the XLR before working in earnest on the C6, and that experience benefited the Corvette.

The XLR was easy to dismiss as just a Caddy in Corvette clothing, but there were many key differences. For starters, the XLR design was new-school Cadillac, though a bit old news, having been accurately previewed by the Evoq concept convertible back in 1999. Also, the XLR came only as a hardtop convertible, with a power-retracting solid roof that pirouetted into the trunk like that of main rivals Mercedes SL and Lexus SC 430 (and left as little luggage space).

And then there was the all-Cadillac powertrain. What else for the division's latest image-leader? A heavily revised "Gen II" version of the respected 4.6 Northstar V-8 boasted new cylinder heads with freer-flow ports and higher compression (10.5:1), plus a stiffer block and crank, redesigned manifolds, and "by-wire" electronic throttle control. The result was 320 bhp at 6400 rpm and 310 pound-feet of torque maxing at 4400. The only transmission was a five-speed automatic with a separate manual shift gate vs. the C6's initial four-speed automatic or available six-speed manual.

Naturally, the XLR inherited the Corvette's much-lauded "uniframe" structure. Composite body panels draped around a steel skeleton with a stiff central "backbone" section, hydroformed side rails, aluminum windshield frame, a cross-cowl magnesium reinforcing bar, and aluminum "sandwich" floors with light balsa-wood cores. Even so, the XLR was clearly a luxury tourer, not an all-out sports car. And there was nothing wrong with that -- not with 0-60 mph available in less than 6.0 seconds and sticky 0.88g skidpad acceleration.

The price was right, too. Though the initial $76,000 tab was almost twice that of a base Corvette coupe, the XLR came with most every amenity known in the automotive world: power everything, heated/cooled seats, OnStar, a navigation system, "smart" cruise control that automatically maintained a safe following distance, and Cadillac's new Keyless Access system with engine-start button and no external keylocks. The only option was satellite radio, and that became standard for 2006, along with steering-linked xenon headlamps.

How did the XLR fare with critics and buyers? Continue to the next page to find out.