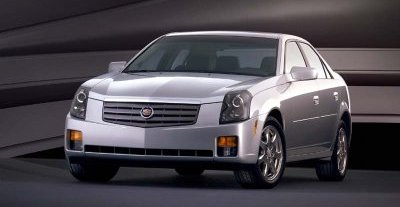 After a rough period, Cadillac introduced successful new models in the 2000s, like this 2003 Cadillac CTS.

So far at least, the 21st century has been a rough time for Detroit. Despite closing plants and cutting jobs since the 1980s, General Motors and other major carmakers lost their once-vaunted competitive edge, burdened by huge fixed costs and continuing losses in sales and market share to import-brand rivals. Add in unexpected jumps in materials costs, plus a market whipsawing from thirsty trucks to thriftier cars in the face of record gas prices, and the result is a "perfect storm" that threatened to send the Big Three crashing on the rocks of bankruptcy.

That simplified summary may sound overblown, but the situation could hardly be more critical in the new millennium. Though all three U.S. automakers still made money overseas, they suffered major losses at home. That forced some drastic "recovery" measures, encouraged by hoards of unhappy stockholders. General Motors was forced to sell assets, close plants, and lay off workers while hoping new models sold well enough to prevent the unthinkable.

Fortunately for this story, some of those products were succeeding, and many of them were Cadillacs. In fact, GM managers fittingly picked their flagship brand to begin what they hoped would be a 21st-century renaissance for the entire company.

A string of boldly styled circa-Y2K concepts suggested Cadillac would again reach for luxury-class leadership, but in new ways so as to stand apart from the European and Japanese brands that had stolen its thunder. If all went well, the resulting new showroom models would have people taking a fresh look at Cadillac, just as the surprise-hit Escalade SUV was doing.

This game plan began to jell shortly before the new millennium dawned. Despite enthusiastic management support, the first of the new fleet couldn't be ready before model-year 2003, but Cadillac made several sensible moves to prepare for its arrival.

Pictured here is the 2004 Cadillac XLR, another member of Cadillac's new fleet for the new millennium.

Continue to the next page to learn about Cadillac's comeback efforts at the beginning of this critical period in its history.