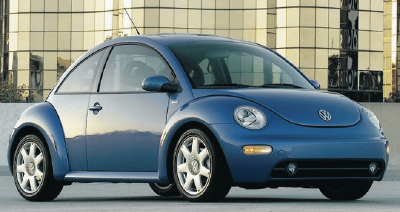 The 2001-2002 Volkswagen New Beetle models included the most-powerful Bug ever -- and a first-ever New Beetle recall.

Base price range for the 2001 Volkswagen New Beetle was $15,900 for the base GL model with a manual transmission and a 115-horsepower 2.0-liter four-cylinder. Turbodiesel models had 90 horsepower and started at $17,900. Top of the line was the 150-horsepower turbocharged GLX, which started at $21,175.

Volkswagen issued the first-ever New Beetle recall in 2002, for an anti-lock-brake electrical control unit that could short circuit and start a fire. The recall included all 2001 and 2002 New Beetles.

Mated to the engine was a new 6-speed manual transmission. The turbo functioned smoothly and without lag, and 60 mph came up from a standing stop in about 7.5 seconds. At highway speeds, the Turbo S was happy to run in fourth gear, leaving the highest two gears available for speeds above 80 or 90. A stiffened suspension helped keep the S's power planted on the pavement.

All turbo New Beetles picked up traction control for 2002, and every model got newly styled wheels and wheel covers. Body colors became more adventurous for the GLS turbo: Snap Orange (as part of the "Lifestyle" option), Luna Green, and Riviera Blue. Interior colors with these packages matched the body paint.