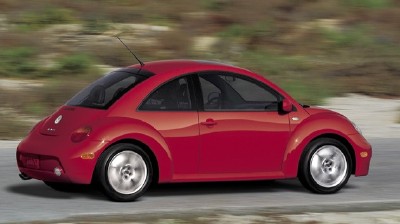 The New Beetle got some spunk for 1999 with introduction of a 150-horsepower turbocharged engine. It came in GLS Turbo and GLX models.
2007 Publications International, Ltd

The 1999 Volkswagen New Beetle picked up a third available engine, a 1.8-liter turbocharged double overhead cam inline 4-cylinder that cranked out a robust 150 horsepower and 155 pounds/feet of torque at 1750 rpm. Volkswagen recommended premium fuel for the turbo, and claimed 0-60 mph times of 8.0 seconds.

The turbo 1.8 was exclusive to the sporty new GLS Turbo and GLX models. The GLX sported a speed-activated rear spoiler, leather seating, and a power sunroof.

Anti-lock brakes and front side side airbags were now standard across the New Beetle model line. Base-price range was the same as for 1998, though many Volkswagen dealers continued to demand more than retail. Despite the gouging, 12-month U.S. sales for 1999 were 83,434, a nearly 60-percent increase over debut-year 1998.

VW increased base prices for the 2000 Volkswagen New Beetle. The range was now $15,900 to $21,075. Engines continued as before, with the 1.8-liter turbo earning EPA mileage ratings of 25/31 city/highway with manual transmission; 22/27 city/highway with automatic.

The 1999 Volkswagen New Beetle GLX was top of the New Beetle line and came standard with leather upholstery and a glass power sunroof.
2007 Publications International, Ltd

The 1.9-liter turbodiesel wasn't sold in California or New York. Horsepower of the 1.9-liter remained at 90, but now it came at a more useful 3750 rpm, down from 4000. Coded, anti-theft ignition keys and a brake-service warning light joined the list of standard features for 2000.

The topline GLX had leather upholstery, heated front seats, alloy wheels, and a power sunroof. For other models, a cold weather package with heated seats and windshield washer nozzles was available for $150.