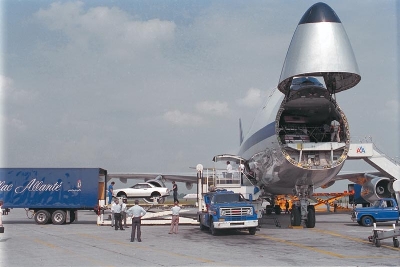 Almost from the beginning, Burger believed the two-place Cadillac's styling should be done by a name European design house -- preferrably Italy's Pininfarina, with which Cadillac had an ongoing relationship.

Famed then and now for designing timelessly gorgeous bodies for Ferraris and many other notable cars, the firm also was capable of building vehicles in modest quantities. "We figured we would get a different flair from designers in Italy than we would at home," Burger explained.

"We were taxed to the limit with all the things we were doing and they had good people who were interested in doing a car of this nature. You could argue that our design people could have done it as well, but we had decided and had the approvals to take that vehicle to Italy. It was the right thing to do," Burger added.

That decision did not sit well at GM Design. When then-Cadillac Studio Chief Designer Wayne Kady heard that the division planned to farm out this exciting program to an overseas design house, he was hurt and angry. Kady's team worked up its own design anyway.

"We did a full-size clay model, interior and exterior," Kady said. "My boss, Stan Wilen, and his boss, Chuck Jordan, were going back and forth looking at the model Pinin­farina was creating, and they'd come back and wonder why we were still working on ours. I told them it was studio pride, that we took it upon ourselves to show that we could design a car as well as anybody.

Pininfarina skipped the clay model phase, preferring to go from sketches to full-size "renderings," then directly to a fiber­glass model. Burger described the day when the Italians brought five renderings to Detroit from which he and his staff would choose one to pursue. They were pinned on the wall, the most futuristic on the left, the most conservative on the right.

"We listened to everything pretty carefully," he said, "and had quite a bit of discussion on each one. The one in the middle played upon attributes of our vehicles that were already out there and seemed to fit our needs down the road, and that's the one we picked. It wasn't a unilateral decision, and I think those who were there would tell you we chose the right one."

For more on the Cadillac Allante's styling, check out the next page.

"I ended up getting in a bit of trouble over that. They looked at ours next to theirs as a courtesy, but they had made up their minds."