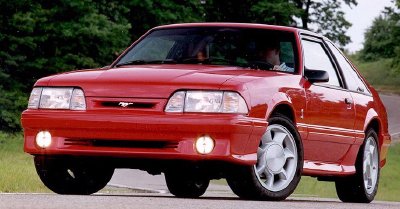 Ford sent out the current generation of Mustang with a Cobra model developed by the new Special Vehicle Team.

Ford Mustang sales hit an all-time low in 1992, and the current generation was starting to get long in the tooth. But the economy started to perk up by model-year 1993, and Mustang sales rebounded to 114,228. In a way, this shouldn't have happened.

Mustang was virtually unchanged, yet now faced a swoopy all-new Camaro/Firebird offering a 275-horsepower version of the latest 5.7-liter Corvette V-8. Worse, having admitted to literally overrating the Mustang V-8, Ford adjusted outputs down to 205 horsepower from 225. Torque decreased, too.

But a hot new Cobra hatchback more than made up for that. Road & Track called it the "best of an aging breed," and by most any measure it was.

Also on hand, or rather under foot, were rear disc brakes instead of drums, the first factory Mustang since the SVO to have them. Ford also touted "balanced" suspension tuning that went against conventional hot-car wisdom by using softer springs, shocks, and bushings and a smaller front stabilizer bar versus the GT.

As for sophisticated, Car and Driver's Don Schroeder termed this "a nicer-riding, more supple car [than the GT]. Although it can feel less buttoned down...the Cobra makes better use of its tires and rewards coordinated hands and feet with clearly higher limits and cornering speeds...."

Nevertheless, a few cynics thought this Cobra just a ploy to keep Ford's old pony car from being completely eclipsed by GM's newer Chevrolet Camaro and Pontiac Firebird. Motor Trend, in fact, called it a "shake-and-bake bridge to '94." Still, it was eloquent testimony to the Fox platform's stamina and versatility. And with only some 5000 built, the '93 Cobra will be a prized example of this long-lived breed.

More collectible still is the Cobra R, which saw only 107 copies. Of course, the "R" stood for racing, which meant track use only. Alterations to the street-legal Cobra included much larger front brakes, competition-caliber cooling system and suspension tuning, appropriately wider wheels and tires, and added structural reinforcements.

In yet another echo of Carroll Shelby, Ford omitted the back seat, air conditioning, and most power accessories to trim curb weight by some 60 pounds. not much on the road but crucial for the track. Ford sold every R-model for the full $25,692 sticker price vs. about $20,000 for a regular Cobra, itself a bona fide bargain.

At Long Last, Time to Move On

Either way, the '93 Cobra was a happy surprise for the Ford Mustang, a car that had stayed so much the same for so long. Life at Ford had been anything but static. Another historic changing of the guard occurred in 1990 when Donald Petersen took early retirement, ushering in Harold A. "Red" Poling as chairman and Philip E. Benton, Jr. as president.

Though the R model was for racetracks only, the standard Mustang Cobra was street-legal.

By the end of 1993, however, Alex Trotman had taken over both positions, outlining a bold new vision for Ford's future. Part of that future would soon arrive in the car everyone had been waiting for: the next new Mustang.