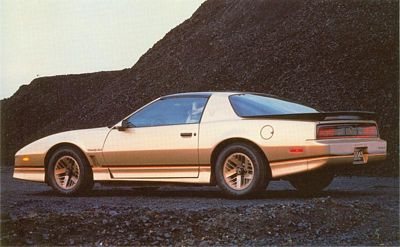 Shedding the vestiges of mannerly behavior, the Trans Am emerged for 1985 with a more assertive demeanor, wearing an expanded version of the aero component package offered for 1984. Like other Firebirds, it displayed a more tapered profile, both front and rear. The new look included foglights and a louvered hood-plus the option of a new wing-style rear spoiler, which presented a more integrated appearance.

Three engine choices were offered, all 305-cid V-8s: carbureted, delivering either 165 horsepower or (in the high-output L69 version) 190 bhp; or a new tuned-port injected V-8, similar to the Corvette's, that was good for 205 frenzied horses. The carbureted engines could be mated to either a five-speed manual or four-speed overdrive automatic; the fuel-injected version came only with the automatic.

In addition to their dramatic new look, Trans Ams-and "lesser" Firebirds too-earned some modifications to improve their ride and handling qualities. The Recaro special-edition was gone, but Trans Ams could travel on 16-inch "Gatorback" tires if the WS6 suspension option was ordered.

Even the posh, slightly cheaper S/E gained horsepower, along with its own louvered hood, reworked graphics, and fresh front/rear fascias. An S/E could be ordered with the 165-bhp V-8. This year brought Firebirds an optional electronic instrument panel and air conditioning controls, new interior trim, and improved acoustics.

After dipping in 1983, Firebird production had hit a high for the decade in '84, then slipped again this year. Even so, the Trans Am was going strong, accounting for 46 percent of Firebird output.