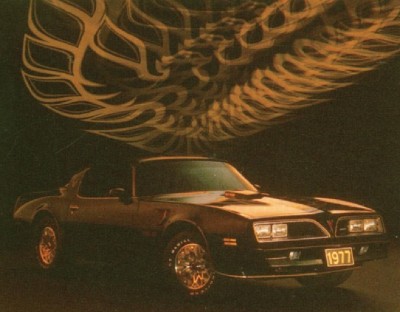 Pontiac stylists were nothing if not clever. They had the ability to periodically impart a refreshing new look to the 1977 Pontiac Firebird Trans Am and Formula without serious modifications to the actual sheetmetal. Front ends displayed a more pointed bumper/grille this year, along with new quad rectangular headlamps.

If exterior changes were ingenious, under-the-hood revisions proved no less startling. First came a switch from Chevrolet's inline six to a Buick-built V-6 as base powerplant. The V-6 developed 105 horsepower, five less than the former engine.

The big-block 455-cid V-8 option was history at last, having endured far longer than many would have predicted. Trans Ams stuck with the 400-cid V-8, detuned to 180 horsepower but retaining its four-barrel carburetor and dual exhaust -- unless the buyer lived in California or at high altitude, that is, in which case the sole Firebird Trans Am choice was a 180 horsepower Oldsmobile-built 403-cid engine.

Pontiac's own 301-cid V-8, with a two-barrel carburetor delivering 135 horsepower at 4000 rpm, became standard gear in the Firebird Formula. Two 170 horsepower, four-barrel 350 V-8s could be ordered, produced by Oldsmobile or Pontiac. Each GM division was borrowing freely from its counterparts.

The 1977 Pontiac Firebird Formula could be ordered with a bold graphics package for an additional $127.
©2007 Publications International, Ltd.

A full 15,567 of the 68,745 Trans Ams built were "Special Edition" models, also known as the "blackbird" option. The bold-look Formula appearance package was offered again, for $127.

Advertising proclaimed the "Firebird Spirit. It's grabbing life for all it's worth . . . doing it with style." Production shot up again, and rose further for '78. Pontiac proclaimed 1978 "The Best Year Yet," offering a special 220 horsepower edition of the 400-cid V-8 to Trans Am buyers.