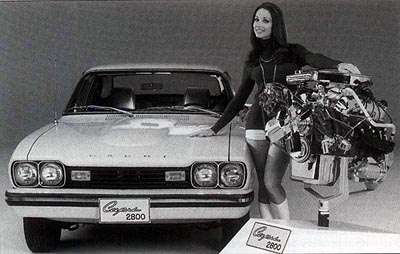 In the fall of 1973, as the 1974-model cars were hitting the market, the first Organization of Petroleum Exporting Countries (OPEC) oil embargo went into effect. It left an immediate impact on new-car sales, including the 1974-1975 Mercury Capri. All of a sudden it wasn't horsepower people wanted, but miles per gallon. The Capri was ready with strong numbers from its tried and true 2000 inline four, although overall sales would fall drastically. (Even stricter emission controls cost this engine another five horsepower, taking it to an even 80.)

The most impressive change for the 1974 Capri was enlargement of the V-6 to 2,792 cubic centimeters. Advertising said it made for a "much more powerful Capri," though output was rated at 105 horsepower, two less than the previous 2.6-liter edition (again in pursuit of cleaner running). The admen obviously had torque in mind when they spoke of power: The 140 pound-feet at 3,200 rpm generated by the new engine represented a healthy boost over the 2600's 130 pound-feet at 3,400 rpm.

Another change to North American models was the introduction of "Hi-Flex" color-keyed molded urethane front and rear bumper covers. This was the Capri's solution for meeting new U.S. government standards that required cars to withstand impacts with little or no damage in collisions under 5 mph. Most automakers produced less-than-artistic protrusions from the fronts and rears of their products, but on the Capri, the result came off a little better. The new snubbers added a full seven inches of length to the car compared to its original dimensions.

With the OPEC embargo spilling over to early 1974, the bottom fell out of the new-car market in America. The industry saw auto sales drop 19.6 percent, the biggest one-year decline since the 1957-58 recession. Capri calendar-year sales fell even more than the industry norm -- about 33.4 percent -- to just 75,260 units.

The Capri's beefier bumpers for 1974 were wrapped in body-color molded urethane.

Effectively, Lincoln-Mercury did not offer a 1975 Capri. In the very limited sales literature that year, 1974 photos and details were recycled, stressing that the Sexy European still had great style and performance. By February 1975, there were few, if any, carryover Capri coupes to be found, and that pleased dealers who wanted a clean showroom floor for March, when they would be welcoming the all-new 1976 Capri II.

Europeans had been driving the second-generation Capri, marketed there as the Mark II, since 1974. Keeping most of the original package concepts in mind, advertising said the new edition was road-proven from Morocco to Finland, and that the "Europeans knew what they wanted."

Design for this new coupe was touted as being an inspiration from Italy's Ghia design studios, which just happened to be a recent acquisition of the Ford Motor Company. Capri was no longer just a two-door coupe either, for it sported the hottest new selling feature of the mid Seventies -- a hatchback.

Overall styling was softer without the distinctive side accent lines and imitation air inlets on the rear quarters. Up front, U.S. versions kept up a link to the previous generation by incorporating Hi-Flex bumpers. With the fuel tank repositioned to behind the rear axle under the floorpan, some safety concerns raised by consumer groups and safety advocates were satisfied.