Capri in the U.S. 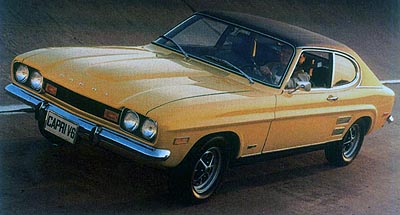 On April 17, 1970, six years to the day since the Ford Mustang's introduction, the 1971 Mercury Capri was placed on sale in dealerships across the land. The reaction to Capri in the U.S. was immediate: Americans liked it.

Capri's physical appearance was transferred to the U.S. with minimal changes. Most notable was the front-end design, which received the federally approved standard quad sealed-beam headlights and a modified grille with independent pods for the combination parking/turn-signal lamps. Block letters that spelled out "CAPRI" on the hood replaced similar "FORD" identification seen on Euro models. As in Europe, Capri's standard package included the use of styled steel wheels, 165 × 13 radial blackwall tires, and power front disc brakes with drums on the rear. Among the few performance options in that first season were larger 185 × 13 steel-belted radial-ply tires.

For a sexy European, the Capri had to maintain an image of color. Six exterior selections were offered in that first year, including Red, Blue Mink Metallic, Ermine White, Fern Green, Aquatic Jade, and Amber Gold. Interior selections were full-vinyl with bucket seats in front and a full bench seat for the rear.

For a very reasonable $75, a Capri buyer could opt for the plusher Decor Group, which featured bucket-styled rear seats with a fold-down arm rest, fully reclining front buckets, a woodtone console with a clock, a map light on a flexible extension mounted to the inside A-pillar, leather-covered steering wheel and gearshift knob, brake warning light, and bright pedal trim. Also included in the Decor option was a special "black-out" grille and dual horns.

However, the Americanized Capri had a few drawbacks. While European buyers enjoyed a virtual buffet of powertrain packages, initial U.S. customers had just one engine available, the 1.6-liter British inline four, backed up with a four-speed manual transmission and a 3.89:1 rear-axle ratio. Federalized versions were rated for 71 horsepower at 5,000 rpm. The car was quick enough for day-to-day driving, but lacked a little of the hoped-for sports-car feel and response.

With dealer prep and destination charges typically adding another $75 to the base port-of-entry price of $2,295, the Capri was priced slightly above the Ford Maverick, but considerably below the Mazda RX-2 coupe, which was one of its main competitors. Other popular Capri options included an AM radio ($75), vinyl roof ($65), manually operated sun roof ($119), and air conditioning ($395).

In its June 1970 issue, Road & Track offered this summation of the Capri: "It's good looking, it's a practical automotive package, and it's being offered at a competitive price. It's a Ford that makes sense." But the lack of performance options was noted. Car and Driver really drove the problems home in its May 1970 issue. "Let the bad part be recorded forthwith: The car is coming to the United States with the wrong engine," said C/D, which compared its performance to that of the Volkswagen Beetle.