By the latter 1960s, Chrysler Corporation had successfully established itself as the major player in the compact-car segment of the American market. This page introduces the 1970 Chrysler compact cars.

With its one-two punch of the Plymouth Valiant and the slightly larger Dodge Dart, the Chrysler products regularly took 30 percent or more of compact sales, a percentage far in excess of its approximately 16-percent share of the overall market.

Since its introduction. Valiant had been restyled twice; once in 1963, and again in 1967, when its wheelbase was stretched out to 108 inches. But with the 1967 rework. Valiant was pared to just two- and four-door sedans, surrendering its notchback two-door hardtop and convertible to its sexier sibling, the Barracuda.

After subsisting on grille and taillight tweaks for 1968 and 1969, Chrysler product planners budgeted $30 million -- split evenly between Plymouth and Dodge -- for facelifting the Valiant and Dart (designated internally within Chrysler as the A-bodies) for the 1970 model year.

Dodge dutifully spent its allowance on grafting new fronts and rears for the Dart's four-door sedan and two-door hardtop bodies. This was the make that fanned the flames of "Dodge Rebellion" in its advertising, but a more literal insurrection was raised by Plymouth's product planners.

Instead of spending their money touching up the Valiant sedans, former Plymouth compact-car planning executive Gene Weiss said they decided to spend "nothing -- zip, zero, nada" on the carryover cars. Instead, the planners clandestinely conspired with Plymouth stylists to bet the entire $15 million on a longshot outside the corporation's sacrosanct product plan.

Why rock the boat? One reason was the all-new Barracuda and Dodge Challenger "pony cars" that Chrysler was conjuring up for 1970. The 1967 Barracuda, while handsome enough, was still a disguised Valiant that really could not compete with its lustier Ford and GM rivals.

And the Dodge Boys wanted a piece of that market, too. So the Barracuda and new Challenger were given their own unique E-body shells. And to make sure you could stuff every one of the corporation's hottest engines underhood, the two also were given most of the heftier chassis components from the Plymouth and Dodge intermediates.

But this process, while beneficial, also had unintended consequences. With their beefier chassic parts, the new Barracuda and Challenger were more costly to produce, a factor that contributed to their good-die-young demise in April, 1974. Worse yet, they weren't quite fast enough.

"At the time the E-bodies were being planned, the relatively inexpensive 327 small-block Chevy Nova was the fastest car [in the quarter mile] right off the haulaway," recalls Weiss.

"And we knew that unless a guy opted for the big-bucks Hemi engine or got a really good 440, the heavier E-body Barracuda just couldn't do the job. We felt we couldn't be really successful with a Barracuda that didn't beat the competition without a Hemi engine. What we needed was a lighter-weight car we could drop our new 340-cubic inch V-8 into to match the quarter-mile times of that 327 Nova. That meant using our [compact body]."

To learn more about the design of the 1970 Plymouth Duster, continue on to the next page. 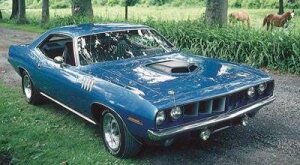