Introduction to the 1967-1973 Jeepster Commando 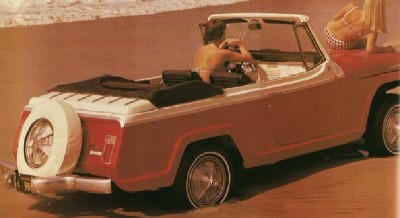 Among the four 1967 models, the Jeepster Convertible was both the sportiest and most expensive. See more classic car pictures.
©2007 Publications International, Ltd.

By the mid-1960s, the International Scout and Ford Bronco were poaching in Jeep territory. Clever use of the parts bins gave the Toledo firm a way to fight back: the 1967-1973 Jeepster Commando was launched.

In 1966, Jeep was a company on the verge of change. Its full name then was Kaiser-Jeep Corporation, and it was the sole U.S. remnant of both the old Willys-Overland and Kaiser-Frazer automobile companies.

A merger of those two automakers, in April 1953, had failed to stem losses from car production, so even before the 1950s ended, the Jeep line of vehicles was the only one still being produced by the company in America. The Kaiser automobile went on to survive in Argentina for a bit longer, while the Aero-Willys automobile was produced in Brazil from 1960-1972.

By October 17, 1966, the date on the above rendering, the basic shape of the Jeepster Commando had been decided.
©2007 Publications International, Ltd.

The Jeep product line was going through changes. It began with the small Jeep Universal, a.k.a. CJ. The venerable Jeep Station Wagon, first introduced in 1946, had remained in the lineup through 1965 despite being overshadowed when it was joined, in 1963, by the all-new Wagoneer. The rest of the line consisted of trucks.

The basic Jeep pickup, first introduced as a 1947 model, shared its chassis and front-end styling with the hoary old wagon, and when they were dropped at the end of the 1965 model year, both the wagon and pick-up seemed ancient.

Various tops were offered for the Jeepster.
©2007 Publications International, Ltd.

A more modem line of trucks, the FC (Forward Control) series, had arrived in 1957, but offbeat styling and nontraditional cab-over engineering made them slow selling oddballs in the marketplace. They were still in the line, but 1966 would be their last season on the market. The workhorse and show horse of the Jeep truck line was the Gladiator pick-up, based on the modern Wagoneer chassis and likewise introduced as a 1963 model.

The Pick-Up featured interiors that tried to get away from bleak painted surfaces.
©2007 Publications International, Ltd.

During the first years after World War II, Jeep had the market pretty much to itself, with the only competition coming from a handful of aftermarket four-wheel-drive conversions of regular pick-ups, a few imports, the Dodge Power Wagon, and International Harvester pick-ups.

But in 1960 International Harvester introduced a new product, the Scout, to do battle with Jeep. Its modem slab-sided body made the Jeep wagon appear even more dated than it already was, and its range of body styles covered the market. A basic roadster was available in two- or four-wheel drive, as was a pick-up version, while a station wagon model won the hearts of many a sportsman by providing a hunting-fishing vehicle that could also haul the family around in style.

The new Scout quickly established itself and sold in decent volume. True, it wasn't a "real" Jeep, but then again Jeep wasn't quite the magical name it is today.

The Jeep Wagoneer was larger and competed in a more upmarket slot when it arrived in 1963, and for a while it seemed that the two makers could eventually learn to split what business there was available, coexisting as competitors in a slowly expanding market.

But Ford put an end to that hope in 1966 with the introduction of the Bronco. This was a new market segment for Ford, yet in its first year it produced more than 23,000 units, good volume indeed. Ford stated that the Bronco was "a stablemate of Mustang," and one couldn't help but notice that the four-wheel-drive wagons were becoming ever sportier and less utilitarian.

Against this handsome new Ford and the solid, sturdy Scout, Jeep had only the tiny Jeep Universal and the much larger and costlier Wagoneer with which to compete.

A new mid-size product was needed to do battle in the market, that was obvious, because if Jeep lost the mid-size 4WD wagon market, it might soon lose the rest of the business, plain and simple.

The Jeepster Commando was introduced in January 1967 to compete with the Bronco and Scout. Continue on to the next page to learn more about this exciting new vehicle.