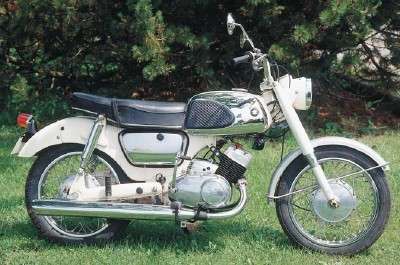 The 1966 Suzuki T10 was aimed at commuters who put a priority on convenience and flexible engine performance. See more motorcycle pictures.

Though the 1966 Suzuki T10 motorcycle is representative of modern-day Suzuki's skills at manufacturing motorcycles, Suzuki started out in 1909 building an entirely different sort of machine. Silk production was a major industry in Japan at the time, and the company got its start making silk looms.

Though Suzuki built an experimental engine in the late 1930s with an eye toward production, World War II intervened.

After the war, the company switched to heaters and farm machinery, and it wasn't until 1952 that the engine resurfaced. It came in the form of a small 36-cc two-stroke that could be fitted to a bicycle, and Suzuki was on the road.

Production of a complete 90-cc motorbike began in 1954, and Suzuki was one of the first companies to introduce oil injection on its two-strokes. That relieved riders of having to ­mix the gas and oil themselves.

Along with oil injection, the Suzuki T10 motorcycle was fitted with such luxuries as electric start, hydraulic rear brake, turn signals (not yet universal), and an enclosed drive chain.

Its pressed-steel frame resulted in flowing contours aft of the chrome-sided fuel tank, and that, along with 17-inch wheels, tire-hugging front fender, and telescopic front forks, gave the Suzuki T10 motorcycle a contemporary look.

Performance was not a priority, the Suzuki T10 motorcycle being aimed at commuters with its mild-mannered engine boasting a broad torque range. That philosophy, however, was about to change.

Keep reading for more pictures about the 1966 Suzuki T10 motorcycle. 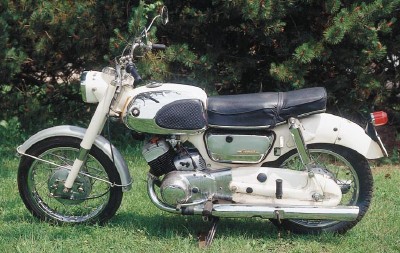 Unlike many Suzuki motorcycles to come, the T10 was designed with commuters rather than racers in mind.

The 1966 Suzuki T10 offered many conveniences, including oil injection, an enclosed drive chain, and an extra-bright headlight.