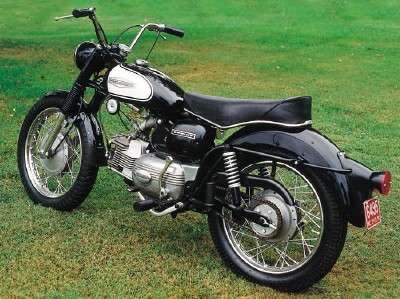 Harley-Davidson and Aermacchi of Italy came together to produce the Sprint. See more motorcycle pictures.

The 1966 Harley-Davidson Sprint motorcycle was an Italian-American hybrid that filled a gap in Harley's line.

Introduced in 1961 as a result of a cooperative venture between Harley-Davidson and Aermacchi of Italy, the Sprint was powered by a 250-cc horizontal four-stroke single.

Despite being decidedly unlike Harley's traditional products of the time, the Sprint was quite popular with buyers.

Little had changed by 1966, though styling had become somewhat more modern. Both street and on/off-road Scrambler models were offered by that time, and modified versions enjoyed a fair degree of competition success.

Displacement increased to 350 cc for 1969 on the street-going Sprint -- now called the SS -- while the Scrambler version did not get the larger engine until 1972.

Both models disappeared after 1974 to be replaced by two-stroke machines, also built by Aermacchi.

Continue to the next page to see more 1966 Harley-Davidson Sprint motorcycle pictures. 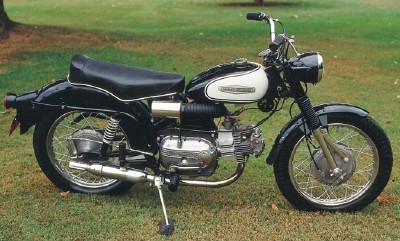 Both street and on/off-road Scrambler models enjoyed a fair amount of competition success.

Although it was unlike Harley's traditional products of the time, the 1966 Harley-Davidson Sprint motorcycle was quite popular with buyers.

A Harley ad of the time asked, "Would you like to quarterback 250cc of hustle?"
The crankcase cover read "Harley-Davidson," but the overhead-cam single was built by Aermacchi of Italy and came with a right-side shifter.
Harley's Sprint-based CR250 flat-tracker was a competitive mount right out of the box.