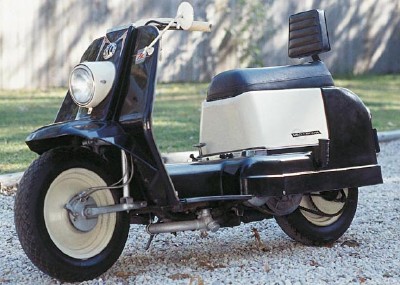 The 1963 Harley-Davidson Topper had a 165-cc two-stroke single that started with a recoil starter -- like a lawn mower.

The 1963 Harley-Davidson Topper motorcycle was among the casualties when the short-lived scooter craze subsided and Japanese brands began to take an ever-growing share of the American motorcycle market.

Capitalizing on the late-1950s popularity of scooters, Harley-Davidson brought out the Topper in 1960. Its 165-cc two-stroke single was started with a recoil starter, like a lawn mower, and drove through a variable-ratio automatic transmission called Scootaway Drive.

Up front was a simple leading-link fork, and there were small drum brakes on both wheels. Beneath the hinged seat was a large storage space, but if that wasn't enough, a luggage rack was available.

For those not content with carrying only two people and luggage, a sidecar was offered -- though fully loaded, the rig must have proved agonizingly slow. Other "big bike" accessories included a passenger's backrest and windshield.

Despite carrying the revered Harley-Davidson name, the Topper didn't sell particularly well in a market quickly becoming dominated by Japanese machines. And it wasn't long before the scooter craze subsided, taking the Topper as one of its early casualties.

Continue to the next page to see more 1963 Harley-Davidson Topper motorcycle pictures. 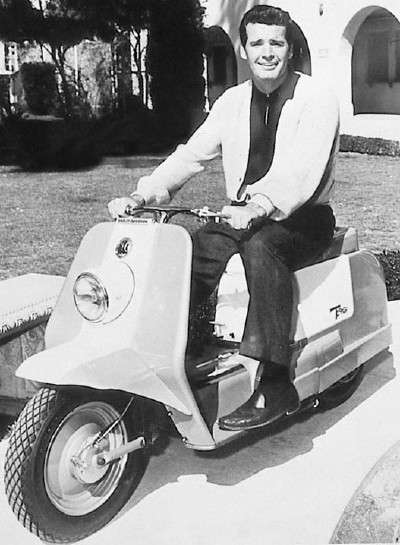 With optional sidebar occupied, the 165-cc Topper was not a fast machine.
The right-hand side of the leading-link fork carried a simple extension spring behind the pivot point, and a shock absorber in front.
This splashy brochure touted the Topper's "high performance" features.
The Topper offered plenty of storage space with its luggage rack and beneath its hinged seat.
The handlebars were located low for a comfortable ride.
The speedometer was difficult for shorter riders to see, being situated as it was ahead of and below the handlebars.