"Every view is refreshingly new," boasted the sales brochure for the restyled 1960 Oldsmobile. Sounds like typical advertising hype; but this time, at least, it was basically true. Essentially reskinned below the belt, the first big Oldsmobile of the 1960s closely followed the enlarged "Linear Look" of the prior year, but had a more subdued and dignified demeanor than the dreamboats it replaced.

Each pair of headlights sat closer together, separated only by a narrow insignia. That left space for a wider grille made up of 24 bright blocks arranged in three rows. The hood's leading edge contained a wide scoop-styled nameplate, mating with the pronounced bodyside crease that ran around front fenders to stretch all the way back to the protruding horizontal taillamps.

A lower bodyside trim strip ran alongside another creaseline, tapering down behind the rear wheel opening, which itself displayed a graceful tapering-off. Twin creases decorated the decklid, and round backup lights were built into the massive, arched bumper.

Promotional drawings exaggerated the broad expanse of the back end, but the artist needn't have bothered. The decklid was plenty wide enough in real life.

So, did all these styling touches add up to the "fresh, balanced, enchanting symmetry" promised in the brochure? Well, maybe that's reaching a tad too far. Gaudiness wasn't exactly gone. The compound-curve windshield remained. So did the Holiday hardtop sedan with its flat-top roof extending beyond a radically wrapped back window. Let's be satisfied by admitting that the latest Oldsmobile was a substantial improvement over 1959, and vastly cleaner than the chrome-riddled 1958.

Oldsmobile customers liked their comforts, and the 1960 Oldsmobiles had plenty to offer. "Quadri-balanced Ride" was claimed to emanate from the wide-stance chassis. Vibra-Tuned body mounting at points of minimum vibration, insisted the copywriters, would insulate passengers from road noise and harshness.

Convenience options ran the gamut from Guide-Matic that dimmed the headlights automatically, to a four- or six-way power seat and power decklid release. If flipping the vent glass open and shut sounded just too, too taxing, powered ventipanes were available. Three-seat Fiesta station wagons came with a power window lift that dropped the glass into the tailgate.

Go to the next page to read more about the body and interior styling of the 1960 Oldsmobile. 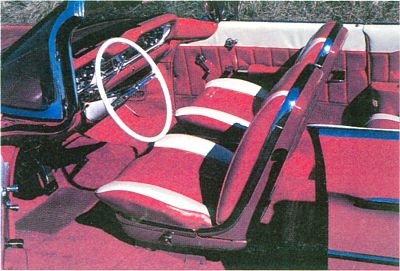 At the base of the price scale, the Dynamic 88 carried a 371-cid (240-bhp) V-8, running on regular gas with its Econ-O-Way carburetion. Both the mid-level Super 88 and posh Ninety-Eight used the 394-cid Premium Rocket Engine with its Multi-Jet carburetion and 9.75:1 compression, producing 315 bhp.

Both "88" series rode a 123-inch wheelbase, while Ninety-Eight wheels measured 126.3 inches between centers and the car stretched nearly 221 inches overall. That kind of bulk translated to some sizable poundage: All Oldsmobiles hit the scales at over two tons.

Road-testing revealed the inevitable result of all that bulk. Motor Trend tried a Dynamic 88 SceniCoupe, and found its 0-60 time to be an uninspiring 12.7 seconds, with the quarter-mile mark coming up in 18.3 seconds at 75 mph. Not too swift, especially when compared to the rousing Oldsmobile 88 coupes of a decade earlier, which had combined the then-new overhead-valve V-8 with lightweight bodies to achieve some striking acceleration figures.

Air suspensions faded into the sunset, with few regrets over their demise. Some owners liked them, but on the whole, air springing had proven to be trouble.

Oldsmobile's promise of "American-size, six-passenger room" was fulfilled with ease. The Holiday SceniCoupe's interior had Jeweltone leather bolsters, and front-seat passengers faced a Twin-Cove instrument panel, with a glove box shaped like the driver's gauge panel.

Oldsmobile offered a lot of car for a few dollars more than comparable Buicks. Budget buy was the Dynamic two-door sedan at $2,835. Most costly: a Ninety-Eight convertible with a $4,362 price tag. No surprise there.

Both critics and customers had liked the 1959 Oldsmobile, buying close to 383,000 copies. This time, total output slid to 347,141, causing Oldsmobile to drop a notch behind Dodge in the industry rankings, to the seventh spot. Considering that Oldsmobile had ranked fourth not long before, that wasn't good news. A big job lay ahead for the next generation of Oldsmobiles, which would turn to a revived performance image to complement the traditional Oldsmobile reputation for easy motoring.

Go to the next page to read the specifications of the 1960 Oldsmobile. 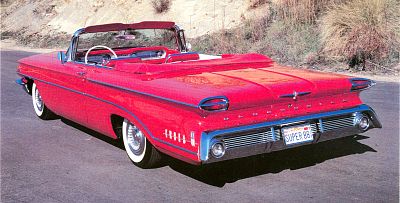 The 1960 Oldsmobile small Super 88 was vastly cleaner than the chrome-riddled 1958.
©2007 Publications International, Ltd.