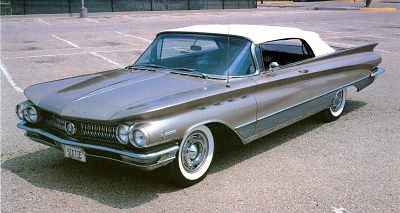 Big changes had been the rule for the 1959 Buicks, with their huge canted "Delta wing" fins and slanted quad headlights. Some considered it the most dramatic Buick of all -- and a sharp contrast to the garish 1958 with its unexcelled load of chrome doodads.

The new model names and body styles introduced for 1959 continued this year: low-price LeSabre, sporty (more or less) midrange Invicta, luxury Electra, and even bigger Electra 225. That latter nameplate denoted the overall dimensions of the long-deck model, which stretched 4.7 inches beyond an ordinary-size Electra.

Basic appearance was similar to 1959, with its then-new long-deck, thin-section roofline, and vast glass area. Changes this year were just extensive enough to soften some of the more frivolous excesses and sharper edges.

A more subdued grille was made up of concave vertical bars -- quite a change from the bulky pattern of chrome blocks that marked the 1959 version -- and quad headlights now sat side by side.

Tailfins were comparably canted and integrated into the overall profile, their upper line extending all the way to the windshield. This time around, though, they sat tighter in, helping to highlight rather than conflict with the deeply sculptured bodysides.

Traditionalists got something they hadn't seen for several years: VentiPorts. Yes, the row of "portholes" that had first identified Buick fenders in 1949 was back, albeit in modified form.

To learn more about the 1960 Buick Electra engine, transmission, and styling, go on to the next page. 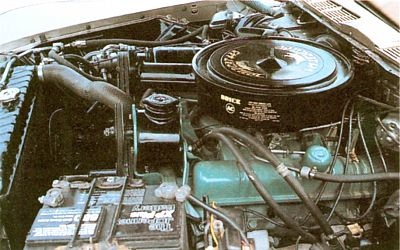 Electras came with power brakes and steering, but this year's dual exhaust system switched to a single transverse muffler. Limited demand and high cost nixed the Triple Turbine Drive transmission that had been optional since 1958.

Instead of the customary "neck-snapping" downshift when passing, the magazine reported "a smooth surge like a rising wave."

Other magic went inside: namely, a new Mirromagic instrument panel that let the driver read the bar-style speedometer and warning lights through an adjustable tilting mirror.

More important to passengers was the lowering of the central tunnel and floor pan, which added leg room. Back doors opened wider than before, doubtless a concession to the age of the typical Electra customer.

The 1960 Buick Electra dashboard panel of speedometer, odometer, and "idiot lights" is actually a mirror reflecting images from horizontal instruments in front of it.
©2007 Publications International, Ltd.

That loss dropped Buick down to the ninth slot, its worst showing in 55 years, while corporate rival Pontiac's fortunes were rising.

Whether the result of poor sales or simply a more conservative styling approach, this revision set the stage for a softening of the look and the quick demise of the slanted fins.

Now, Buick was ready to slim down a bit, inject an extra dose of performance, and debut a mini edition to match its full-size luxury tourers.

"When better automobiles are built," trumpeted ads with regularity, "Buick will build them." Whether the 1960 Electra was "better" than the 1959 is a matter of taste.

With a convertible top down, in particular, either of those huge heavyweights still turns heads today -- even if some observers might be taken aback at the sight of all that chrome and bulk.

For 1960 Buick Electra specifications, go on to the next page.

The 1960 Buick Electra was softer and more subdued than its 1959 predecessor. But with tailfins, VentiPorts, and a "Wildcat 445" engine, the sedan was still a highly stylized -- not to mention, powerful  -- luxury tourer.