For the 1959 Corvette, the busied '58 chrome styling was cleaned up considerably. The oft-derided faux hood louvers and decklid chrome bars were now nowhere to be found. Otherwise, there were few changes from the previous model year.

Interior alterations were just as minor and just as effective. There were repositioned armrests and door handles, a shelf added beneath the passenger grab bar for extra small-item stowage space, and reshaped seats that at least now offered token lateral support. Sunvisors were a newly added option, and concave instead of flat instrument lenses (to cut down on reflections) were added to the instrument panel; a T-handle lockout for the manual transmission was included to prevent a driver from accidentally engaging reverse gear.

Powertrain choices were again unchanged, but the 1959 featured a minor mechanical alteration of major benefit: the addition of rear-trailing radius rods that helped contribute to a slightly softer ride and noticeably less rear-end steering on irregular surfaces. The rods also helped counteract rear-axle windup, which was an unfortunate byproduct of a problem with the explosive torque produced by the most powerful engines, and the RPO 684 heavy-duty brakes/suspension option was given even stiffer springs -- all of which made for better handling.

Most Corvettes could shoot through the quarter-mile in under 15 seconds, and 0-60 mph times of less than eight seconds were typical. Road & Track clocked a 290-bhp fuelie engine from 0 to 60 mph in 6.6 seconds and on to the quarter-mile mark in 14.5 seconds at 96 mph. Top speed was listed at 128 mph with the short 4.11:1 final drive.

Brakes also received some attention, with newly optional sintered-metallic linings (RPO 686) developed by GM's Delco-Moraine Division. Priced at a mere $26.90, the option comprised three pairs of lining segments that were riveted to the primary brake shoes and five pairs of slightly thicker segments for the secondary shoes. Drums were finless with this option but were flared at their open ends to enhance cooling. The sintered linings made braking less harsh than the Cerametallic material and needed far less warming up to provide maximum braking effectiveness.

At about this time Chevrolet was working on a new and far more radical concept for America's sports car -- the so-called Q-Corvette. This was a much smaller and lighter two-seat coupe with very streamlined styling, an independent rear suspension, and a rear transaxle derived from the one being developed for Chevy's new rear-engine compact, the 1960 Corvair. Unfortunately, the Q-model would be another false start on the road to a truly new second-generation Corvette.

Production totaled 9,670 units for the 1959 model year, a slight increase over the year before. Chevy still wasn't making much money on Corvettes, but it wasn't losing any either. Sales continued their steady if modest climb for 1960, exceeding the psychologically important 10,000-unit level by exactly 261 cars. 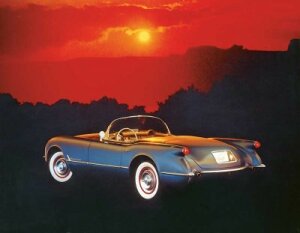 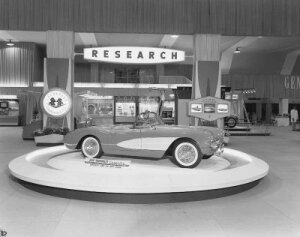