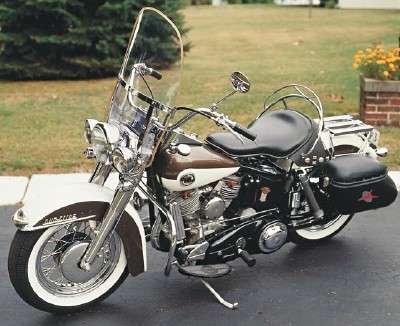 The 1958 FL Duo-Glide benefitted from a new rear suspension -- a modern swingarm with coil-over shocks.

Finally, after decades of relying only on a sprung saddle for "rear" suspension, the big Harleys adopted a swingarm with coil-over shocks in 1958. With that, the Hydra-Glide became the Duo-Glide, upping the ante in the touring market.

Two versions of the Big Twin continued to be offered: The milder, low-compression FL engine ran cooler and was easier to kick over than the hopped-up FLH, making it better suited to around-town driving.

Despite the new rear suspension, a sprung seatpost remained standard, providing what Harley termed "the Glide Ride." Of course, nearly 600 pounds worth of bump-flattening weight didn't hurt, either.

Go to the next page to see more 1958 Harley-Davidson FL Duo-Glide motorcycle pictures. 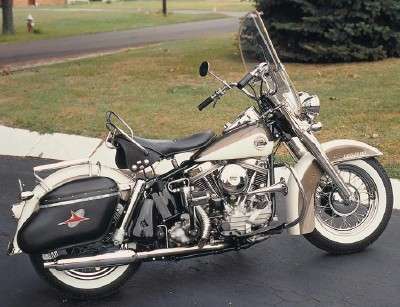 Two versions of the Big Twin were offered. The FL's

In 1958, the FL got a new frame with a modern swingarm with coil-over shocks. Despite the new rear suspension, however, a sprung seatpost remained standard.

The speedometer got its own chrome stage.
The FL Duo-Glide's triple-headlight setup was part of the big-Harley image.
"Duo-Glide" referenced the FL's coli-over-shocks rear suspension design.
The FL Duo-Glide's "see and be seen" items included chrome fender tips.
An advertisement for the 1958 Harley-Davidson FL Duo-Glide motorcycle.