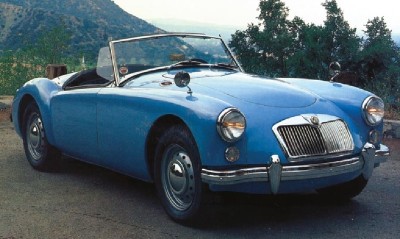 For the 1961 and 1962 MGA, during the period of 1600 Mark II production, the rarest and least known MGA model was built in very limited numbers: the MGA 1600 Mark II DeLuxe. Only 395 of the now much-sought-after DeLuxes were produced, although reliable sources indicate that the first 82 were actually Mark Is.

The DeLuxe utilized leftover Twin Cam chassis, which, of course, featured disc brakes on all four corners and knock-off disc wheels. Engines, however, were the standard 1622cc units and the structural improvements of the Mark II were also incorporated into the DeLuxe.

MGA production ended in June of 1962, but not before the factory celebrated the production of the 100,000th MGA. That record-breaking event occurred on May 16, 1962, when a gold export model with gold wire wheels and creme interior -- and "100,000" badging -- rolled down the assembly line. The following month, number 101,476 was built -- the last MGA. That, too, was an upbeat occasion, for the MGB was on its way.

As related, the odds against the MGA were great. John Thornley, Syd Enever, and associates of the caliber of Reg Jackson, Gordon Phillips, and many others carried on the innovative tradition established by the late Cecil Kimber back in the days of the Morris Garage in Oxford.

Their problems were prophetic of more to come during the MGB era: another merger, nationalization, and the abortive scuttling of the MGB on October 27, 1980, after more than a half million of that great series had been built. MG's demise created a furor in England and sensitized even the British Parliament.

But the closing of Abingdon was not the end of the road for MG. Today, the MG badge is attached to high performance models -- some turbocharged -- of the little Metro and the somewhat larger Maestro and Montego models from the Austin-Rover Group (the Austin name was phased out during 1987).

Rumors persist that a true sports car bearing an MG badge is on the horizon, likely a top-down adaptation of a Honda model, the Civic CRX.

Whatever the fate of current efforts to revive the MG name and even to reintroduce an MG sports car, the MGA remains unaffected. After all, the MGA -- the world's most popular sports car during its lifetime -- earned a revered place in automotive history long ago.