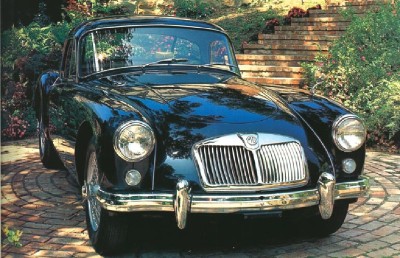 Styling of the MGA was smooth and aerodynamic.

While publicly promising the new MG as soon as possible, Thornley duly introduced the three 1955 MGA prototypes and sent them on to qualify for the London Motor Show. They looked low and sleek with their special aluminum bodies and were properly adorned in British Racing Green.

The MG Faithful were well represented in the stands and a score of correspondents for automotive enthusiast magazines from both sides of the Atlantic were on tap.

Then disaster! Early in the race, a Mercedes-Benz crashed through a barrier and flew directly into the crowd across from the pits. Many spectators were killed and scores more sustained serious injuries.

As if an epidemic was taking place, the MG prototype driven by Dick Jacobs, longtime MG competitor, crashed on the White House corner just as the yellow caution flags came down. He was badly injured.

The race was almost called, but then continued; by the end of the event, only a third of the 60 starters had finished the course. The two surviving EX182 prototypes impressed the crowd by taking fifth and sixth places in their class, close behind a team of seasoned Porsches and an extremely quick Osca.

In his book Maintaining the Breed, Thornley later referred to the 248 and 230 laps completed by the prototypes at average speeds of 86.17 and 81.97 mph as a "technical success." MG enthusiasts found the results more than encouraging and dealers chomped at the bit for cars to sell. However, the new MG sports car would not appear until September.

But it would be new; a radical enough departure from the T-series that, as with Henry Ford's Model T successor, it seemed appropriate to go back to the beginning of the alphabet to name it. Thus, the Ford became the Model A, the British roadster the MGA.

Five months without an MG sports car! Nothing approaching that sort of calamity had taken place before (other than during World War II, of course). The delay created difficulties for everyone. Dealers wrung their hands, trying their best to assure willing buyers that the new models would soon be available.

The later Twin Cam engine powered the MGA to a top speed of 115 mph and from 0-60 in nine seconds.

The annual Ulster Tourist Trials came shortly before the introduction of the MGA 1500. As in the Le Mans Twenty-Four Hour Race, the Abingdon works entered a team

of three prototypes, much to the delight

of The Faithful. One of them was powered with a standard pushrod engine, but the other two ran dual overhead camshafts --

a prophetic glance into the MGA's future.

valve troubles, forcing them to retire early. The standard engine prototype did well, however, finishing fourth in class behind a team of Porsches, practically a repeat of the Le Mans experience.

The Ulster Trials marked the second effort under the newly organized factory sponsorship. During that event, a tragic smashup involving seven cars ended in the death of two drivers. Fortunately, not one of the prototype MGAs was involved, but the BMC board, never enthusiastic about factory-sponsored competition in the first place, suspended all further racing activity.

Even the Royal Automobile Club, long a cooperative organization, decided that the old Dundrod, Northern Ireland, course was too dangerous, and so the venerable track was closed.

To learn more about the long-awaited 1955 MGA, continue to the next page.