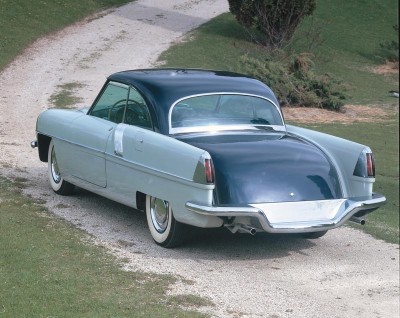 It was a lack of capital, not talent, that kept the 1953 Paxton Phoenix Convertible Coupe from ever taking wing. Robert Paxton McCulloch is most famous for the chain saws that bear his last name. In the early Fifties, he set up an automotive division using his middle name.

The Paxton supercharger was the division's most successful product and was factory installed in Kaisers and Studebakers. However, a prototype for a luxury steam car was Paxton's most interesting exercise.

McCulloch envisioned a coupe selling for about $10,000. A Porsche 356 was purchased and inspired the four-wheel independent torsion-bar suspension. Power was to be provided either by a supercharged two-cycle gasoline engine or by steam. Steam was favored and McCulloch turned to an expert. What Shakespeare was to literature, Abner Doble was to steam vehicles.

Early steamers could take more than half an hour to get up steam and had to make frequent stops for water. The Doble steam car of the Twenties could be ready to go in less than a minute, travel 400 miles on a gallon of water, and exceed 90 mph. High purchase price and shaky financing killed the Doble car.­ Doble's design for the Paxton steam engine promised to be smooth, quiet, and powerful. However, full development of a postwar steam engine would have been prohibitively expensive. The steam unit was tested on a dynamometer and in a Ford chassis, but was never installed in the Phoenix. The four-cylinder Porsche air-cooled engine, left over from the sample 356, was eventually installed in the Phoenix's rear engine bay.

Brooks Stevens, the talented industrial designer responsible for the Jeep Wagoneer and a skillful 1962 facelift of the Studebaker Hawk, styled the Phoenix. He designed a four-passenger coupe with a clever power-retractable top. Rather than folding, the top slid back and covered the similarly shaped rear deck. This simple, elegant solution was space-efficient and unlikely to leak.

The body was fiberglass -- even the chrome-plated bumpers -- keeping weight down to a light 2,200 pounds. Other unique features were a telescop- ing steering wheel and power door openers.

After spending more than $1 million, McCulloch killed the project because it was diverting too much money and engineering time from more-profitable business. McCulloch occasionally drove the Phoenix and it remained at his Southern California factory until after his death in 1977. Stevens eventually bought the car for his museum in Wisconsin. Following his death and the 1998 breakup of the museum, the Paxton was purchased by its current owner, Myron Vernis, of Akron, Ohio. Mr. Vernis says the car is fun and rides well, but as a prototype in the early stages of development, it is not very refined. The Paxton has only 615 miles. Paint and leather are original, and it needed no restoration other than a previous reconditioning of the engine.