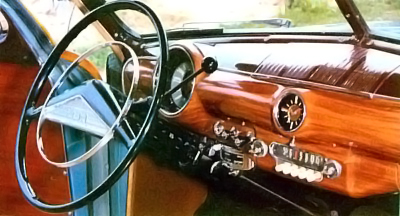 A close-up look at the 1951 Ford Country Squire reveals a wagon that was still handsome inside despite the gradual replacement since 1949 of genuine wood trim with woody-look substitutes.
Publications International, Ltd.

The Ford and Mercury woody wagons came to an end with the 1951 editions, which achieved an all-time high in FoMoCo woody production. Though they were still the most expensive models in their respective lines, they had the poorest resale value.

Meantime, Plymouth, Chevrolet, and others were tapping into a whole new market with all-steel wagons, and Ford was not about to be left hiding in its own woodwork.

"I was in charge of a small group called the Body Development Studio. What we had to work with was a 1952 sedan with two doors on one side and four doors on the other.

"From this model, it was our assignment to design all the others using maximum interchangeability of parts, and this is when we came up with the [Ford] Ranch Wagon and the Country Sedan and the Country Squire.

"That 1949-1951 station wagon had the worst resale of any car in the line. It was the most expensive car in the line, and it had the lowest production. [Actually, the Ford Crestliner and business coupe had lower volume.] GM and Chrysler both had all-steel wagons. They were outselling us, and their wagons had better resale.

"The all-steel wagons that we came out with, that first year they built all they could build [the Korean War put restrictions on all 1952 production] and by the third year [1954] they got up to 145,000.

"The Ranch Wagon had the best resale of any car in the line, which was a complete reversal from the old wood jobs... I was never very sympathetic towards the 1949-1951-model wagon because it was an economic flop, and I designed something to replace it."

If FoMoCo woodies were now history, they weren't forgotten. For a time they were cult vehicles favored by California surfers and beatniks, while a few were loved and cherished by owners who religiously varnished the wood every spring. And even before most models of the 1940s and 1950s became collectibles, the woodies had achieved a certain "special interest" status.

Today, the 1949-1951 wagons have survived in the greatest numbers because they had the highest original production and because of their sturdier steel inner panels and tops. Unfortunately, it is hard to find an unrestored specimen from any of these years with "perfect" original wood.