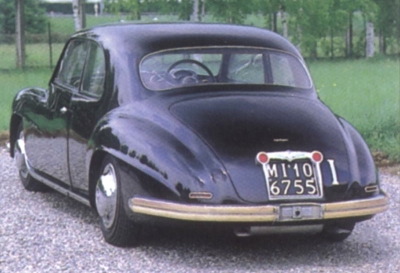 In 1943, the so-called Isotta Fraschini Tipo 8C car began exhibiting the characteristics for which it would be known. For his car, Rapi chose a rigid platform construction with the chassis welded to an internal body frame. This particular design, which withstood extensive stability checks at the Caproni aircraft factory, was intended to serve as a model for various body designs like those of the most luxurious full-chassis European cars produced prior to the war. Conventional European unibody construction had heretofore been unable to meet those standards.

In July 1943 -- only days before the Allied invasion of Sicily, which marked the beginning of the end of the regime of terror in Italy -- the work done by Rapi and his colleagues was briefly jeopardized. Searching for saboteurs, Mussolini's henchmen entered the engineer's small office (by now situated in Saronno, near Milan, due to the bombardments) and discovered the prohibited plans for a passenger car. Rapi outwitted them by explaining away the drawings as plans for military speedboats. These "specialists" were not able to recognize them as sketches for a car!

At the time, the Isotta Fraschini Tipo 8C was progressing rapidly. In keeping with the international trend, Lampredi had developed a water-cooled V-8 engine with hemispherical combustion chambers and a 90-degree block, predictive of the FirePower V-8 Chrysler would put into mass production beginning in 1951. The innovative slanted overhead-valve design was actuated by one overhead camshaft per cylinder head. During the developmental stage, different displacements were realized. Lampredi began with a 2.5-liter engine, later increased to 3.0 liters, then to 3.4 liters. It is very interesting to note that the engine, gearbox, and differential were combined in a single block constructed from a special light-metal alloy.

Assembly of the prototypes was complicated by a shortage of available materials after 1945. Rapi and his colleagues drove hundreds of miles with a bare chassis made roadworthy with the addition of simple fenders and a windscreen. The first 8C body, a sedan, was fashioned by Zagato. The Milan coachbuilder created a classic streamlined body with a striking resemblance to the Tatra. This prototype was equipped with ultimately ineffectual rear side radiators.

A second Zagato-bodied prototype relied on a front radiator of conventional appearance, but it was backed by a complicated and very costly system that seemingly offered the only solution to cure the heating problems. (It remains a mystery as to whether there were two different chassis, or if Zagato had only modified the prototype, which was probably the case. Similarly, the question of whether the chassis of the first Zagato prototype lies within the body of one of the few surviving cars remains unanswered.)