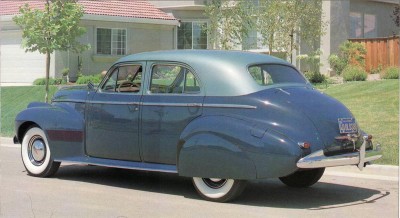 Like other automakers, Oldsmobile was in dire straits in 1932, when output plummeted to just 18,846 units. But by 1940, Oldsmobile was on a roll with the 1940 Oldsmobile Series 90 Custom Cruiser Sedan and the rest of its lineup, as an impressive 185,154 cars were built. There was much to celebrate, a host of firsts led off by the pioneering Hydra-Matic, the first fully automatic transmission offered to an eager American public.

But there was much more, such as the new Series 90, a replacement for the hitherto top-of-the-line Series 80. The 90 was bigger, riding a 124-inch wheelbase, compared to 120, and a foot longer, to boot. The new size moved Oldsmobile firmly into what we would nowadays refer to as the "near-luxury" market, and in this segment Oldsmobile had plenty of guns to fire.

Hydra-Matic was a four-speed automatic that finally eliminated the clutch pedal, years ahead of Oldsmobile's "Automatic Safety Transmission" first seen in 1938. Not only that, it cost only $57, a price (probably partly subsidized) set to make it instantly popular. Demand far outran supply.

And then there was the styling of the Series 90. The four-door, sometimes called Touring Sedan, featured a semi-notchback profile, blanked-out rear quarters, and vent windows in the front-hinged rear doors, which did away with the so-called "suicide" doors on the Series 60 and 70 sedans.

This was only befitting of the first Oldsmobile to carry a "Custom Cruiser" designation, as was proudly displayed on the center of the dash, along with Hydra-Matic, if the car came so equipped. In addition to these firsts, all Oldsmobiles (and most of the rest of the industry) provided sealed-beam headlights, a true safety feature.

Inside, the Series 90 four-door shouted "class." A deluxe steering wheel was standard, as was a walnut-grain dash. On cars with Hydra-Matic, the gear selector "box" just beneath the steering wheel read out, from left: Neutral, Drive, Low, Reverse. Broadcloth upholstery covered foam-rubber padding, with a rear center armrest, and leather was optional.

On the outside, the more rounded lines of the Custom Cruiser sedan looked up-to-the-minute, and the headlights were more fully integrated into the fenders. The hood was lower, and so was the grille, which looked attractive despite its fussiness. The horizontally mounted taillights rode low, too, and looked particularly attractive in their chrome housings.

The 1940 model year was also significant at Oldsmobile in that it saw a changing of the guard. Between November 1933 and August 1940, Oldsmobile had built one million cars, under the guard of general manager C.L. McCuen, and fittingly enough the millionth car was a Series 90 Custom Cruiser sedan.

In 1940, S.E. Skinner took over the reins, and in late 1948 he would enhance Oldsmobile's reputation as General Motors' experimental and innovative division by presiding over the introduction of the modern overhead-valve V-8.

It has blue-gray broadcloth, plus options like Hydra-Matic, radio, fender skirts, and even a trunk light. It required a "light restoration," Bob says, and had seen only about 60,000 miles when photographed. This car is proof that Oldsmobile was on top of things in 1940.