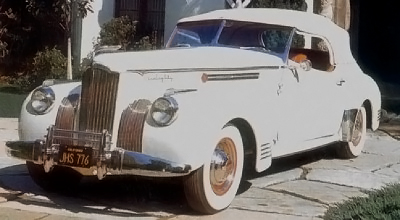 The 1941 One Eighty Convertible Victoria rode the 127-inch wheelbase and retailed for $4595.
©2007 Publications International, Ltd.

Back in Hollywood, Dutch Darrin was promoting the 1940 Packard Darrin with his usual flair: "One of the stunts we did was to leave one of the cars in front of Romanoff's where many of the Hollywood personalities had lunch. We'd bribe the doorman to keep an empty space right by the door, so anyone alighting couldn't help but notice it. We also got a lot of free publicity, and made a little side money by renting our cars to the studios for movies."

Dutch was riding high: "I figured I'd hit the big time. Packard was the most prestigious luxury car manufacturer in the country, and they would certainly take every Darrin I could hand them. We were soon hopelessly backlogged and I went to Detroit looking for more production facilities."

Dutch was unable to arrange any production in Detroit, and Auburn closed its automotive division at the end of 1940. Darrin then transferred the operation to the hearse and flower car builder Sayers and Scoville in Cincinnati, Ohio. "Their directors were all on hand to watch the first 1941 Packard Darrin come off the line -- followed closely by a hearse!" Dutch said. "It was quite a sight."

Quoted production figures for the Cincinnati Darrins, all Super Eight Convertible Victorias, were 35 for 1941 and 15 for 1942. A Sport Sedan was catalogued for 1941, but there is no record of any production. In design, the Cincinnati cars followed established Darrin lines, with trim shuffles to coincide with model year face-lifts: fender-top parking lights for 1941, low horizontal flanking grilles on each side of the main grille for 1942.

A dark color is perfect for showing off the bright chrome trim of the 1941 Packard Darrin One Eighty Convertible Victoria.
©2007 Publications International, Ltd.

Some Packard followers have wondered why the company itself never took on Darrin production. There are many good reasons, the primary one being the transfer of Packard body production from its own Grand Boulevard plant to Briggs commencing in 1940.

Other factors included the strong emphasis on medium- and low-medium priced models by 1940, and the relatively limited market for Darrins; had Packard made the cars available in unlimited quantity, buyers for such esoteric models would have eventually petered out because there simply weren't that many to go around, even with the Depression ending.

Finally, Packard never entirely got over its doubt about the structural rigidity of the Darrin, Rudy Stoessel's aluminum cowls notwithstanding. P.S. de Beaumont, a prewar Packard engineer, said the company actually produced kits to improve front-end strength, because Dutch had removed the radiator cradle to lower the grille. The Darrins looked fantastic, management may have reasoned, but they still weren't up to Packard body standards.

Because of World War II, Dutch switched his focus to other pursuits. Read about the final days of the Packard Darrin on the next page.