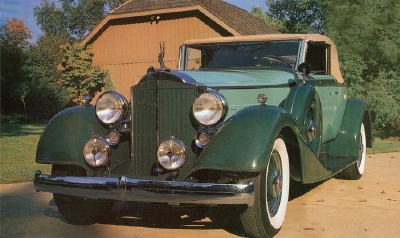 The 1934 Packard Eight was the low-level, but most popular, series for that year. See more classic car pictures.
none

The Packard Motor Car Company largely snubbed the model year change, designating its cars by "series," which often ran for far more than a year. But not in 1933, when the Tenth Series lasted only from January through August. There was good reason for that -- to debut new styling and mechanical updates for a new line, including the 1934 Packard Eight coupe-roadster and to take advantage saleswise of what looked like a hopeful easing of the Depression.

The 1934 Packard Eight coupe roadster was one of more than 40 models for Packard that year.
none

The magnificent Twelve, with prices starting at $3,820 and soaring beyond $7,700, found only 960 well-heeled buyers willing to indulge themselves in those tough economic times. The Super Eight, base priced at $2,950, didn't fare much better: Only 1,920 were built.

The straight eight-cylinder in the coupe-roadster offered up 120 horsepower.
none

The coupe-roadster had a nicer interior than other Eight models.
none

But sales remained slow, and with the more extensively revised Twelfth Series on the way Packard slashed prices on June 21, 1934, resulting in a $2,180 tab for the dashing coupe-roadster. Even with that,

No matter, the excellence of these cars has long been recognized -- they carry full Classic status with the Classic Car Club of America.

The coupe-roadster seen here has covered 84,000 miles. Flaunting Trippe lights, side-mounted spares, and luggage rack, it is a testament to the quality and style of the cars that once rolled out of Packard's East Grand Boulevard factory in Detroit.