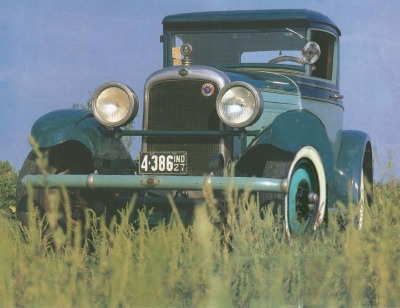 The year of the 1928 Nash Advanced Six Coupe was the company's most successful to that point. See more classic car pictures.
©2007 Publications International, Ltd.

The 1928 Nash Advanced Six Rumble-Seat Coupe was created when America was on a roll in the "Roaring Twenties." Not only was the country rolling, but so was the Nash Motor Company. The firm had been founded by crusty Charles W. Nash, who had resigned as president of General Motors in June 1916. On July 29, he bought the Thomas B. Jeffery Company of Kenosha, Wisconsin, and by April 1918 was building cars under his own name.

The fine reputation that Charley Nash took with him from GM was enough to assure success. The firm charged up the sales charts, reaching as high as eighth in industry production during the 1920s. And 1928 would be Nash's "roaringest" year of the decade as 138,137 cars were built, good for 3.67 percent of the market and enough to keep all three assembly plants humming at capacity. It was a record that wouldn't be broken until the advent of the 1949 "bathtub" Nash Airflyte.

The walnut steering wheel was one of the many elegant features of the Nash Advanced Six Coupe.
©2007 Publications International, Ltd.

Nash's success was no fluke, for the firm offered solid, well-engineered cars at reasonable prices. They came in three series: Standard Six, Special Six, and Advanced Six. The price-leader Standards used an L-head six developing 45 bhp -- America's "lowest price seven-bearing six." The Special, however, boasted a 52-bhp overhead-valve unit-a result of Nash's earlier stint as president of Buick, one of the pioneers of "valve-in-head" engines.

Appropriate to its top-line status, the Nash Advanced Six also featured an ohv, seven-bearing motor, but it was larger: 279 cid, good for 70 horses on 4.6:1 compression and a mid-70s top speed.

Despite such formidable foes (plus others), Nash's Advanced Six was the equal of its competition. And even though it hadn't changed much since 1926, it sported a taller radiator for 1928 -- and remained stylish and modern for its day.

Our feature car, which belongs to Ken Havekost, of Monroe, Michigan, is in "near original" condition. It was first purchased in October 1927 (the 1928 model year had begun on June 29) at the Chicago Auto Show, and Ken has the original title.

Features include the then-faddish disc wheels, walnut steering wheel and window frames, golf-bag trunk, and rumble seat. Bumpers, spotlight, and adjustable shocks were extras. The taillight is an after-market item.

One look at this charming Advanced Six should explain why 1928 was a banner year for the Nash Motor Company.