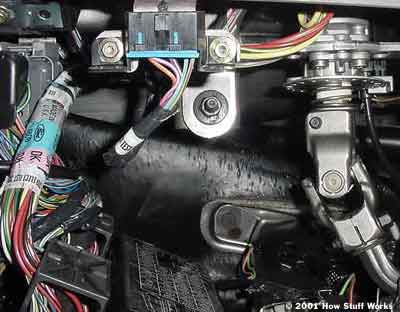 Bundles of wires under the steering column of a car

A car's wiring has to distribute power from the battery to devices located all over the car. It also has to transmit data on a data bus, as well as a variety of digital and analog signals from switches and sensors.

This means that there are many different types of wires in your car. Some wires that transmit signals from switches or sensors carry almost no current. Those that provide power to large electric motors carry lots of current.

If too much current goes through a wire, it can overheat and melt. The amount of current that a wire can handle depends on its length, composition, size and how it is bundled. Let's take a quick look at how each of these properties affects the wire's current-carrying capacity:

(See also this Question of the Day for a good explanation of current, voltage and power.)

You can see how important it is to choose the correct wire size. The job is made even more difficult by the number of wires in a car, which continues to grow each year as new features are added to even the most basic automobiles.